The Cruise to Aruba - Willemstad, Curaçao

My first impression of Curaçao was from twelve miles away. I wondered why the island was brown. I thought Caribbean islands were supposed to be green. Tortola, in the British Virgin Islands, was green even when closer inspection proved it to be far more arid than it first appeared from the deck of the Star Princess. The entrance to Tortola by cruise ship, by the way, is one of the prettiest we've seen. Its only scenic rival in my book is the entrance into San Juan, Puerto Rico, in the afternoon when the sun shines on El Morro castle. Still, the hills of northern Curaçao just didn't fit my preconceived notion of what they were supposed to look like. With oil refineries dominating the landscape, it just didn't rank up there with the picturesque ports of call in the travel brochures. 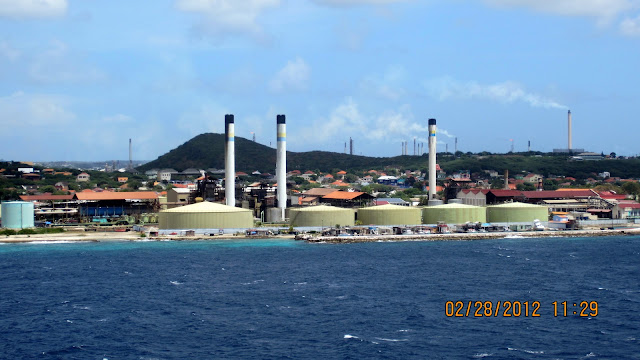 Once we were in the lee of the island, a little after 12:00 noon, the trip turned into a cruiser's dream. Very little wind and the sea was calm. Passengers flocked to the top decks to catch their first glimpse of Curaçao, still several miles away. Curaçao, as it turns out, has less than 22 inches of rain annually, mostly during their three-month rainy season, October through December, so it doesn't rank very high on the lush, jungle habitat list. Actually, it isn't even on the list. The little island nation also lies outside the “Hurricane Belt,” but still occasionally catches the effects of nearby storms every few years or so. No hurricanes have actually struck Curaçao since the National Weather Center started monitoring the storms. As a result, the wind blown north eastern side of the island is really quite barren. Willemstad, the Capitol where we dock, is on the west side, the leeward side, of the island, and looks more like what we anticipated. 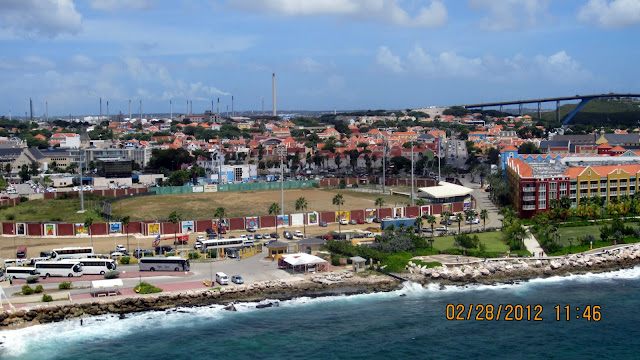 First impressions count, and we were impressed. Willemstad is a paradox, though, unique in more than one way. First, let me say we will come back. The city of Willemstad is very pretty and we want to see more of the island, but I have never seen so many refineries so close to a major town or tourist attraction. Clean, flame burning towers and vents surround the northern and eastern parts of town. The oil business obviously contributes to the economy of the island and its standard of living. Bustling, tree-lined, four-lane boulevards are obvious from the deck of the ship. Tourism and cocoanuts are obviously not the sustaining life force here. Tourism helps, I'm sure, but there is room for only one huge cruise ship at a time and I'm sure that's the way they would prefer to keep it. These people are busy working. While it is still a cruise ship port-of-call, the difference from most others on the cruise ship circuit is apparent well before you disembark.

Disembarking is an art form we have mastered. When the ship's P.A. System announces it is clear to disembark, we go to lunch. By the time we are finished with our leisurely meal, we calmly and quietly disembark without any fan fare or crowds. Cool! The ship's photographers however, are persistent, and they won't let you off the dock without staged “Pirate Pictures” or whatever the theme is for the current port. For Curaçao it is the pirate gig. We try to decline, but the determined, almost belligerent photographers aren't about to let any potential dollar slip by. Damn it, we dressed up like idiots just for you! Be grateful and stand still while we take your friggin' photo while we pretend to cut your throat! 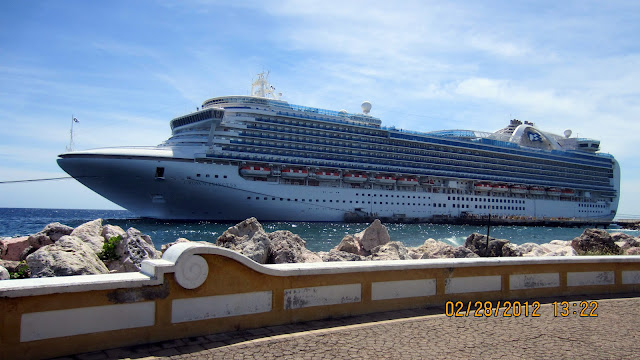 We are soon standing on the dock in the shade of the massive ship, looking back in awe at the 15th deck. That is way, way up there and to think the spray was blowing in the balcony door that high!

Time to see the city that looks like it is the wrong continent. Willemstad could easily be in Holland. That's only natural as the city reflects its Dutch heritage, even though the name Curaçao is derived from Portuguese. The proper pronunciation is with a soft “c,” almost like a “z”, for the last syllable. As in Coorazow. No, not sew, sow, like in a female pig. Let's see, hmm, consider the Portuguese islands in the Atlantic we know as the Azores. The Portuguese call them the Açores. The pronunciation is the same, ah, you know what, screw it.

We walk past the de rigueur tents and tables set up just outside the official customs zone of the dock, checking souvenirs and prices as we go. The vendors show the same practiced tolerance found in any port, but they smile easily. And they are actually polite. We have been treated otherwise, believe me.

Next - The City of Willemstad