The Cruise to Aruba - Day Two 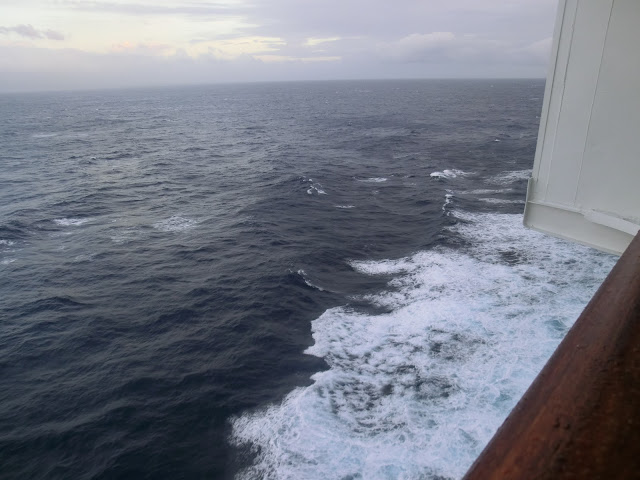 It's really aggravating for a writer not to have anything to write with. It's far worse than having a blank piece of paper and nothing to write. Writer's block passes, and unfortunately for me, so does the thought I often want to capture. I'm out of paper, scribbling this in the margins of the ship's newsletter before I wander off and forget to capture the moment.

We are currently southbound out of the Princess Cays at 21 knots in fair seas. It is 5:30 pm in the afternoon, about an hour to sunset, and we have the Atlantic Ocean to ourselves. There is a huge rain storm off on the far horizon, otherwise the weather is beautiful. Sitting outside on the balcony is a pleasure we always enjoy. There is nothing else like it. We are perhaps 150 feet above the bow spray, maybe higher. The sea is Navy Blue, the dark, pure blue that only is found in the deep ocean. Low hanging clouds begin to pass by us, almost as close above us as the water is below us. And I don't have anything to write with.

Ah, the concierge! Are they on deck seven? Or six? The sweet British girl at the desk took pity on me and handed me all the blank white paper from her printer in-tray. I will forever be indebted to the pretty girl who probably thought I was a great novelist or reporter in dire straits. Well, maybe not, but at least she smiled like she understood. I got back to the room in time to change for dinner. It will be dark by the time we pass the coast of Cuba, but I'll be back, watching, trying to remember what I wanted to write about.

Nothing like Gale Force 8 winds to get your attention, even at 1:45am in the morning. I knew they were Gale Force 8 winds because the ship's television said so. I turned on the Bridge report which gives constant updates about the ship when the blowing winds and ocean spray forced us to close our balcony door. The blowing sheets of water surprised me, we were on the 15th deck! I thought the old girl had shuddered and protested as much as she could Saturday evening coming across the Gulf Stream, but I was wrong. Sleep was out of the question as we jerked back and forth constantly. The television showed winds across the bow at 43.1 knots, around 50 mph, with seas listed as seven feet. Ship's speed displayed as 22.8 knots. We were rockin' and rollin' out here in the middle of nowhere in the middle of the night. Actually, we were literally around the corner from Guantanamo Bay, Cuba, some 100 or so miles away as we are just east of Navassa Island.  We were in the Windward Passage and I really don''t have any argument with the name of the place.  My wife was uncomfortable, but not physically ill. I'm sure many of the over 3000 passengers, and perhaps many of the 1,200 crew members were far worse than just uncomfortable.

By 4:20am, the winds had increased to Gale Force 9 and the outside wind noise was seriously intruding on the happy, steel drum cruise music piped through the television. Oddly enough, I was hungry.

We covered the 253 miles from Princess cays in 12 hours and 20 minutes. The wind hadn't abated in the slightest, and laying in bed was by far the easiest way to cope with the constant, erratic motion of the humble Crown Princess.  Humble may not be the correct word here.  She's chugging along at a solid 22 knots so we will arrive in Willemstad by 1:00 pm tomorrow afternoon come Hell or high water.  So to speak.  Shuddering and shaking perhaps, but she is unslowed by the elements.  The schedule will be kept.

The gap between our joy of cruising and our cost of cruising is closing more rapidly than we expected. We already dropped any plans for an Alaska cruise after seeing friend's photos of several different Alaskan cruises, most of the ports of call, and simply comparing costs. Not really our cup of tea. We now have serious reservations about our planned Panama canal trip early next year as well.

Perhaps we need to just bring more money and pay for the privilege of being separated from the mass of passengers, but then, the costs skyrocket. When I say the cost of cruising, I don't mean just the monetary expenditures of the cruise itself.  Getting on the boat is already an expensive outlay.  We fortunately do not have to fly or pay airfare to get to a cruise port.  We are conveniently located between Tampa, Ft. Lauderdale, and Miami, three of the busiest cruise ports in the U.S. and can drive to any of them if we choose. We prefer the bus, where charges are just less than two hundred dollars for the both of us to Miami and back.  And of course there's the extra four hundred dollars to kennel the dogs for just a week. It does add up.

To make matters worse, it is à la carte once you board the cruise ship and ship's prices have pretty much gone bonkers.  Once on-board, you are a captive audience!  At six dollars a Budweiser, don't expect any breaks on-board. They don't do anything for the passengers except the basic dining and an ice cream on the pool deck. If you want sprinkles on your ice cream, have your room key ready, the sprinkles are extra. 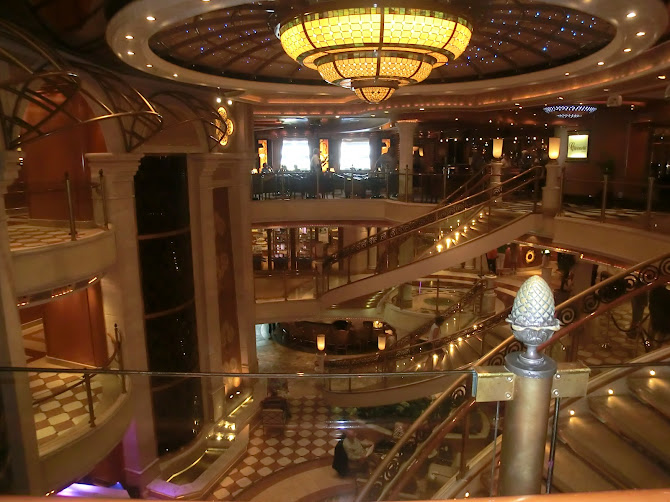 The basic dining is still exceptional, but we wonder how much longer it will last. Higher caliber restaurants are already available above and beyond the common dining rooms, as outstanding as they are, specifically appealing to the cruisers who prefer not to mingle even with the common diners. Those dining rooms carry a $25 surcharge per person per meal.

The shows are still free, but I wouldn't be surprised to be asked to show my room card sometime in the future. They probably haven't thought of it yet. So, to be jammed in with thousands of people has to have its rewards and those rewards are fewer and fewer than before.  We are reconsidering how we will spend our vacation money.  Basically, we do not care for big boat cruising.  I guarantee you I will never sail on the Oasis of the Seas or any ship that carries 5000 passengers.

We head back to our balcony as soon as the seas and winds subside, separated from the rest of the ship. Peace and serenity once again settle over as we sit on our small, semi-enclosed balcony. We watch as white caps rip off the top of the huge waves and roll away from us instead of hitting us broadside. The wind has subsided to 30 knots and is now off our port stern. We pass Haiti on our port side, the mountains visible through the distant haze. I can only understand portions of the captain's message over the PA system, the garbled voice says the water depth in the channel is 1600 feet. We now turn more southeasterly and head into deep blue waters of the Caribbean, our final heading to Willemstad. 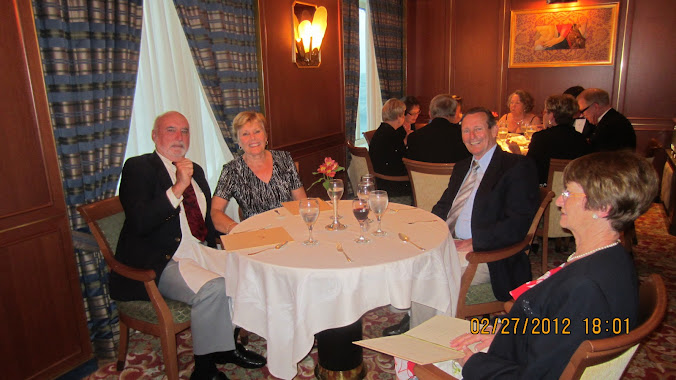 The old girl has settled down. Once again I fall for the charms of cruising, paradoxically in love with the incredible beauty found only at sea. The huge, slowly rolling waves firmly rise up and dominate my senses as nothing else, and gently, slowly, the massive mountains of water disappear into the long trough of spray-strewn, almost placid swells. Technically, these are swells I suppose, but I still like the wave definition. These waves are massive world-travelers. They are the dominators of the ocean. How far have they traveled, where will they eventually crash ashore? Are they from the coast of Africa? Will they crash in front of tourists in Cancun, or slam ashore in unseen by anyone but seagulls and pelicans? The period has increased to twelve seconds, double that of yesterday's waves. The period is the time between crests, and the time accentuates the massive size of each wave. The ship's log finally shows seas as “Rough,” twelve feet or so. They look higher to me, but then I'm not driving. The Crown Princess is in her element here. And if I want to see more of it, I have no choice but to go cruising.

Most of my fellow passengers don't have a clue. They are all over the pool decks, eating, sun-bathing, and generally taking a break from the cold, northern winter. They are enjoying their vacations exactly as advertised. My wife and I are enjoying the cruise as well, just in our own way. The open sea, glistening silver under the sun, deep blue otherwise is simply beautiful.

As we sail further and further south, the size of the waves increases and soon the sea is a mass of twenty foot behemoths tipped with white spray that cause our Captain to throttle back somewhat to minimize the astonishing resistance they present. They try to impede our our voyage, to prevent the incursion into their world.  The shuddering is back, but this time it is Mother Ocean causing the protest. The shuddering and and slamming is not as consistent as the night before, but when it comes, it is far more severe. Our huge vessel cedes to the power of the Ocean only slightly, probably to keep everyone in the hot-tubs from banging their knees. Actually, all swimming pools and hot tubs are closed. The water sloshing out of the main pool reaches the overhead of the sun deck just above it. I have it on video tape. We press on toward our shopping rendezvous in Willemstad. We are now just under a day away.

We awake Tuesday morning to milder seas. The period is down to six seconds and the Bridge report say we now have rough seas. What were they yesterday, I wonder? We opened the balcony door and wiped the salt spray off the deck chairs while the Captain announced we were some thirty miles from Willemstad. He said the sea and wind had subsided and the remainder of the approach would be smooth. He also commented we were some thirty minutes behind schedule, even though we had been running at close to full speed for the entire 44 hours. My wife joked our clothes had done more dancing in the closet than we had on the dance floor.

We ate breakfast in the dining room for the first time, far more civilized than acting like foragers who hadn't yet discovered fire.

Next: Willemstad and Curacao