The Cruise to Aruba - Oranjestad, Aruba

We slept with the balcony door open and the air conditioning off. Really nice to wake up to nothing but cool, ocean air. I dressed and headed up top to watch the sunrise and the approach to Aruba, and was fortunate to catch one of those golden sunrises you see in travel brochures just as we approached the city of Oranjestad, Aruba.

I was dumbfounded by the narrowness of the channel as we approached the dock and the angle of the approach to it. This pilot was going to earn his money or we were going to look like the Costa Concordia. The Paardenbaai Channel is only 270 meters wide, about 885 feet. In other words, the ship couldn't possibly turn around in the channel because the Crown Princess, at 953 feet, is considerably longer the channel is wide! And the channel has a bend in the middle to boot! Fascinated, I watched as the Crown Princess confidently sailed right up to the wharf where the ship's thrusters took over and pushed us up gently against the bumpers. If you weren't watching, you would have no idea we had arrived and docked. By 7:57am, we were secured at Cruise Terminal “C” in Oranjestad.


As soon as the announcement was made about disembarking, we went to breakfast. We used the forward gang-plank after eating at the open buffet, and after checking out of the ship with our room cards, walked to the welcome center that everyone passes through to access the buses and taxis waiting to hustle people anywhere they want to go. The sign hanging over the exit to the buses says, “Welcome to Aruba, One Happy Island.” I thought to myself, “We'll soon see!” 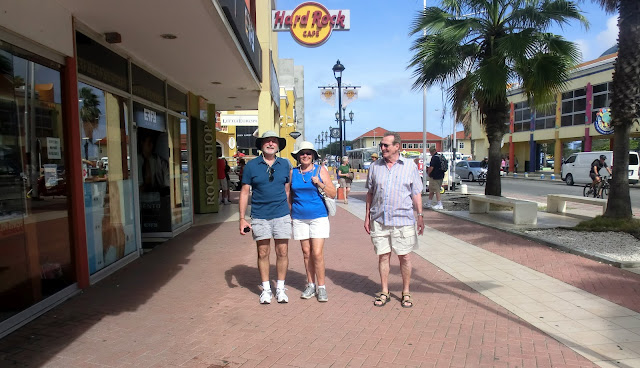 As best we can tell, the sign was right. Again, the people we met were warm, friendly and easy going. Not everyone we met in town spoke English, but there was no problem as someone spoke the language or its close approximation in just about every store we stopped. Doesn't matter, smiles and a little courtesy do wonders here. Our first serious stop was the Kong Hing Supermercado grocery store to pick up water and munchies to sustain us as we wandered around side streets and local shops before heading back to the main vendor areas along the waterfront. After fantasy stops at Diesel and other European outlets, and one pharmacy, we slowly headed back toward the port. 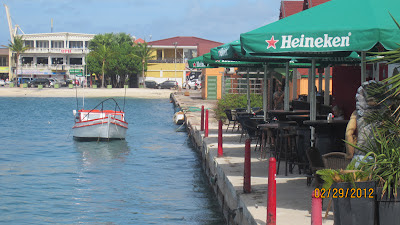 There are lots of typical bars that appeal to the carefully maintained image of Caribbean abandon and lack of sobriety that appeals to the sunshine and alcohol deprived vacationers from up north. These places must look better in the dark. We stopped at one for about three minutes before moving on to one that was closer to the water and further from the greasy kitchen odors. Pigeons wandered around the floor of the restaurant we finally selected and yellow finches freely flew through the outside seating area, landing to serenade patrons from the power lines strung for the lights. The Heineken beer I had was three dollars cheaper than the Budweiser I had on the ship back on day one. 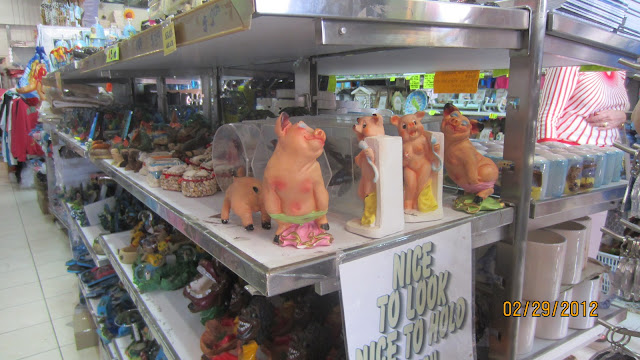 There is one side trip here I would like to do, so perhaps someday we'll return just to take the submarine trip, if nothing else. Atlantis submarines offers underwater tours in a real, Coast Guard approved submarine just off shore from Oranjestad. Kind of a real glass bottomed boat tour, well, glass sided boat tour anyway. We saw the submarine as it was being towed into position to accept guests and it appeared to be a well done operation. Just something to think about for next time. 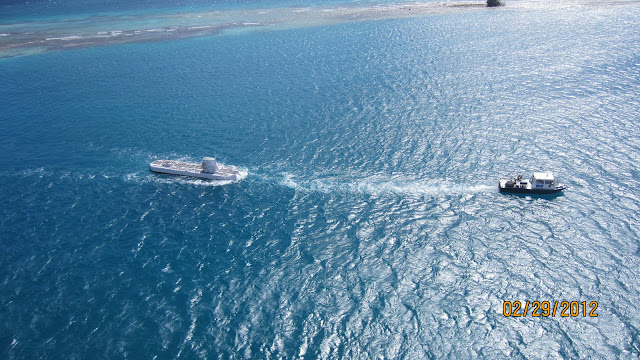 Next: Docked next to the Freewinds