The Cruise to Aruba - Headed Back 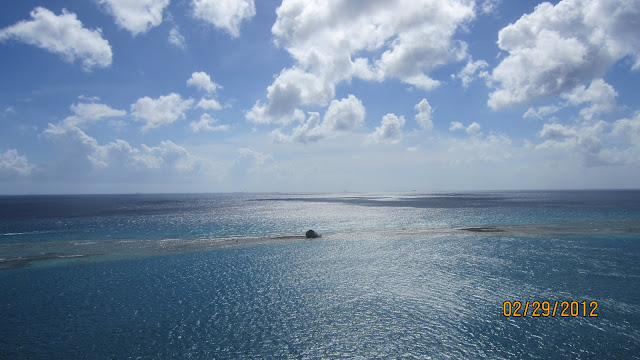 Aruba looks like a place we'd like to come back to visit.  Even if we took as many excursion tours as possible from the ship, eight hours wouldn't be sufficient time to see the highlights of the city or the island. We look at maps and books before we arrive in any city for the first time, and then usually strike off on our own. Wandering around in Willemstad and Oranjestad was just fine for what we wanted. We have done excursions in Grand Cayman, Ocho Rios, Jamaica and in Tulum, Mexico, and the only one that I couldn't have done on my own was the tour of the Mayan ruins at Tulum. There are advantages and disadvantages to every excursion, and we felt we would do better in both Curaçao and Aruba on our own. Now we know better what to expect when we come back, and whether we want to come back at all. We aren't into gambling and partying like there's no tomorrow, so most of the “active” resorts aren't what we're looking for.  Still, the weather is great and the water is just about perfect. Right now, however, we are back on board. Time to just kick back and relax.

As I look sleepily at the hazy horizon from our balcony, I realize there are huge oil tankers everywhere. They seem to be motionless, but all headed south toward nearby Venezuela. I count ten scattered across the ocean in front of me, most near the horizon or at least several miles offshore. They all appear to be motionless. Oddly, none are headed in the other direction. By the time I head up top for departure, I count sixteen tankers, all patiently waiting.  The huge tankers just fade away over the horizon only to be continually replaced by new arrivals.  It doesn't take a genius to figure out the oil business is not going to go away anytime soon.

As I head toward the bow, the pointy end of the ship, an airliner passes in front of us about a half-mile away, headed toward the airport in Oranjestad. He may be well away from us, but I don't have to look up to watch him on his landing approach. Passengers on the airliner must be surprised to come in off the ocean and pass by a cruise ship at almost eye level.
I watch as the mooring lines are hauled aboard and the ship's thrusters gently move us away from the dock. If you aren't watching, you can't tell the giant ship is moving. Slowly, the ship begins to move forward toward the port channel marker. The starboard channel marker is so close I might lose sight of it as the we proceed out the incredibly narrow channel. Without fanfare or attention, the Crown Princess gently pushes her bow to starboard as we move forward and we neatly turn between the last two markers headed for the open sea. The pilot boat picks up the pilot a little after 5:15pm and we swing around to head northwest toward Port Everglades, some two days away. 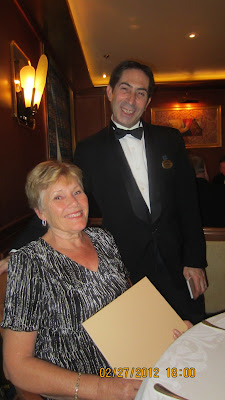 My wife and I and our German friends head to the Botticelli Dining room for our 6:00pm seating and another great meal. There are 533 crew members in the food service and dining staff alone, and we are thrilled with our waiter, Antonio, and the assistant maitre d' Alphonse. Antonio and Alphonse have served together for eighteen years, and their relationship is unique. They are the pinnacle of dining professionalism in the cruise industry, and certainly make dining one of the highlights of this cruise.

Our cabin is on the same deck as the pools, just in the forward part of the ship, so walking through the pool area is something we do every chance we get. When we are being serious about walking through the ship, we take one of the four elevators in the stateroom area and bypass the pools., but tonight we are leisurely enjoying the music and the great, warm evening on deck after a great dinner.

A typical Caribbean 5-piece band plays standard cruising party music, like Dexter Poindexter's classic “Hot Hot Hot,” which you get to hear at least once on every cruise, from the mini-deck above the pool deck. At least this time we're not suffering from 30 different choruses of “Red, Red Wine,” or “Yellow Bird,” which I now often hear in my sleep. During a moment of crowd revitalization, the lead singer screams out for responses to the different nationalities he calls out. He starts, of course, with U.S.A. The response is loud and boisterous, yelling, whistling and clapping from all over the pool deck. Next he calls out United Kingdom! There are enough responses to make a polite, almost subdued noise that soon fades away. He then called out Canada! The response is thunderous! No doubt the Canadians make up the majority of the revelers on the pool deck! They are one of the few nationalities that get even less vacation time than Americans, so they must pack a great time in a shorter schedule. They do love to have a great time.

We take in a late show in the ship's theater and are treated to an unexpected performance by one of the ship's regular crew. The Crown Princess does a “Crew Show,” where talented members of the crew who aren't members of the regular show cast get to display their talents in the ship's theater. Some were interesting, a few were obviously amateurish, but one young Indonesian steward gave an outstanding drum performance, including a nine minute solo, that brought the house down. The party on the pool deck had subsided by the time we walked back up, so we watched the stars for a while, enjoying the cruise with the wind and waves at our backs for a change.  Makes for more fun that way.

When we enter our stateroom, not only do we not find the bed turned down as usual with the accompanying mints, but also a White and Blue, formal looking envelope lying perfectly aligned on the bed. We have been invited to the Captain's cocktail party at 5:15pm on Thursday, formal attire required. The invitations to the Captain's Cocktail Party are reserved for those who have sailed before with Princess Cruises and are a way of recognizing and appreciating your past business. We immediately have a problem. We both have reservations about going because neither of us brought real “formal” wear on this cruise, although my wife is far better prepared than I. I didn't even bring a suit, just a blue blazer and one long sleeved shirt that I can get away with in the dining room. I did stuff a couple of ties into the jacket pocket, old habits die slowly, but to consider this “formal” attire for the Captain's Party was a stretch. We decided, “What difference does it make now, what are they going to do, ask us to leave?”

So, on Thursday, at the appointed time and place, we got in line with 1700 other passengers who have also sailed previously with Princess Cruises. So much for the dress code. They actually had to have three separate Captain's Parties to accommodate everyone! The Captain was a busy man that afternoon, and I'm sure he didn't care how I was dressed. He did give an award to a British lady who had the most time at sea with Princess, a record 727 days. That's over two years at sea! I know Navy men who don't have that much sea time!