The Cruise to Aruba - Willemstad - The City 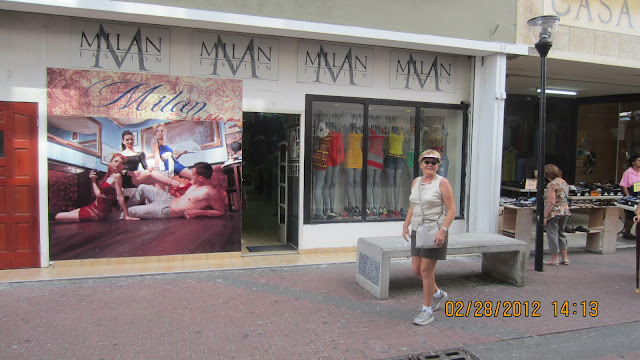 Ah, A writing pad! One of those old-fashioned lined ones from days of yore, you know, high school! A kind, but somewhat bewildered saleslady with a limited knowledge of English, dug out an old white pad from a stack of paper products near the cash register in a Willemstad dime store. She looked at me as if I were trying to pull a fast one, but, took my FL 2.90, about $1.70, without question and cautiously closed the cash register drawer.

Now, to catch up. I actually started scribbling while we were having one of our rare soft drinks in a sidewalk cafe, oddly enough across the street from a McDonald’s. We had crossed the Queen Emma pontoon bridge over into Punda, the original section of the city, and spent several hours poking into shops and stores, generally looking around acting like tourists when we decided to take a rest break. We were sitting in the shade, chatting and watching the crowd of tourists that shuffled aimlessly along, not like us, of course.  We were joking about the McDonalds across the street when a police car rushed up, quickly parked and blocked the street. Two uniformed officers got out and headed toward the restaurant. We joked, “Man, they must be hungry!” but it turned out to be a business call.

They met an agitated, concerned young woman wearing the traditional McDonald's management-type uniform on the sidewalk outside the store. We watched idly as they all disappeared inside. Soon, they all reappeared on the sidewalk with three young, clean cut, muscular looking young white men in tow. The tallest of the three had on a red T-shirt with “Guantanamo Fire Department” emblazoned across the back. He was obviously not happy, taking photos of both police officers, their car, the license plates, the manager, and anything else he thought would intimidate the police officers who simply ignored him.  The two police officers addressed the other two men who stood with their arms folded across their chests.  We could only imagine the confrontation inside the restaurant. 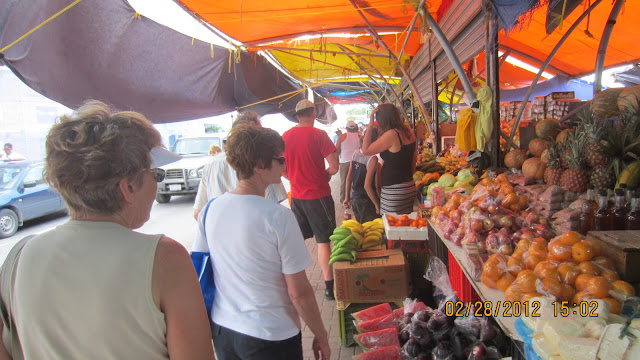 We finished our drinks and headed back toward the ship, and as we crossed the street we heard one of the police officers say rather firmly, “No one is going anywhere until the U.S. consul arrives!” A good time to speak German.

We asked a woman we stopped on the street if, by chance, she knew where the Numismatic Museum is located, the one attraction we all wanted to visit.  That is the coin and money museum run by the Bank of the Netherlands.  The lady walked us a complete block out of her way, saying hello to friends as she went, even stopping to caress a baby of a friend, just to point to the building several blocks away. We walked right past it coming in and didn't see the sign. We thanked her and slowly headed in that direction, but got sidetracked once again, this time by the huge open air vegetable market we could see down a side street. By the time we reached where the Queen Emma bridge should be, we realize we have missed the museum once again. Oh well, something to see next time!

The Queen Emma bridge wasn't there. It was completely on the other side of St. Anna Bay. We joined the throngs patiently waiting for a tug boat to tow an ocean-going freighter slowly up the bay, taking photos as we waited for the floating pontoon bridge to chug across the river and reattach to the landing. The bridge is self powered, and within minutes of the freighter passing, the bridge reopened and hordes of pedestrians crossed the bridge in both directions.

We finally bought our goodies at the shops we knew to have the lowest prices, we never buy going in to town, only coming out after we know prices, and we picked up a bottle of blue Curaçao liqueur for a friend. Of course we bought the prerequisite trinkets and mementos, stuff that always ends up in a junk drawer somewhere, but, hey, that's one reason we're here.

Time to head for the ship and another great dinner. 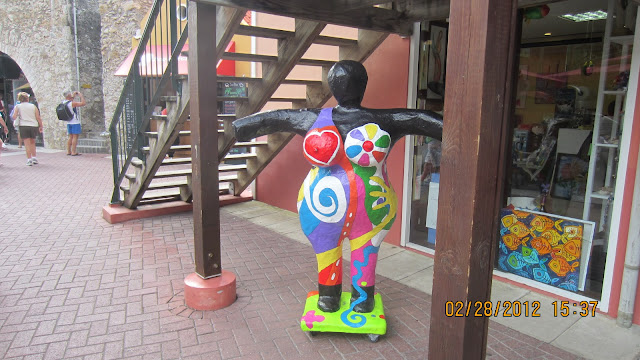 Next: On to Aruba

It was fun to take a vicarious walk with you, in shorts, down the streets of a Dutch possession where i had no idea they still had one. I am abashed.

I also enjoyed looking back and reading "I Envy Artists" - so great. I know the feeling a bit, as the technical writing i do at work must go through an editor. On line, pretty much anything goes. It will be interesting to see how that effects the evolution of language.