The Cruise to Aruba - Day One

We joined the ranks of the forgetful fifties and the stress free sixties on our first day at sea: we had to go to the concierge to retrieve names and dates of our last Princess cruise. Not only couldn't we remember the name of the ship, we couldn't agree when we took our last cruise with Princess Cruises. We were directed by the apologetic concierge to go up a deck, find the Wheel House Bar, then locate the Princess Club director, a young officer who looked at me in disbelief when I explained my dilemma. I thought to myself, “Just wait, you'll understand soon enough.”  His computer system has a different data base from the ship's main system, and he soon had the data at his finger tips.

Not only did we get the date wrong - it was 2004 - but we weren't even close with the name of the ship. It was the Star Princess, and we had cruised to San Juan, St. Thomas once again, and finally visited Tortola.  We remembered the ports but not the ship. So much for my razor sharp memory.

Quite a lot about cruising has changed in eight short years. If you forget to return a ship's library book, for example, the charge today is $55. Who knows what it will be in another eight years.

Also gone is the ship's drugstore. Gone with it is the cheap liquor that you could buy there and take to your room. On our 1992 S.S. Norway cruise, I bought a 1.75 liter bottle of Drambuie for me and a 1.75 liter bottle of Amaretto for my wife, for less than either bottle alone would have cost me stateside. We proceeded to finish off both bottles before the end of the seven day cruise and managed to run up a three hundred dollar bar bill to boot. We missed St. Johns that trip. They swear the boat stopped there but you couldn't prove it by us.  Those days are over, in more ways than one. First my body couldn't take it, and secondly, neither could my wallet. A built-in safety net I suppose.

We spent our first, almost summer like day anchored off the private island called the Princess Cays. Private is the operative word here. If you don't mind being shuttled to and from the island in small tenders along with 3000 other passengers, well, maybe you can call it private. We stayed on board as we did on the last three cruises and enjoyed having the ship to ourselves. We found this time we were not alone as many of the “veteran” cruisers also elected to remain on board and enjoy the peace and quiet. Many of the first timers, and those who don't normally have access to beaches, enjoyed the day swimming and eating barbecue, hot dogs and hamburgers, enjoying a sandy beach party.

By noon, we were sitting peacefully on our balcony, hundreds of feet above the beautiful clear blue water off Eluthera, reading and writing in the warm sunshine. We watched the constant flow of shuttles to and from the beach with detached interest. Still worth the price of cruising, all the changes not withstanding.

While sitting on the aforementioned balcony, sipping the red wine we brought aboard ourselves and snacking on the five or six delicious cheeses we carried back from the lunch buffet, we were distracted by sporadic hammering and an occasional burst from a power tool from somewhere below us. The noise was from a work crew, strapped to the ship in safety harnesses, working on a lifeboat some six or seven stories below us. 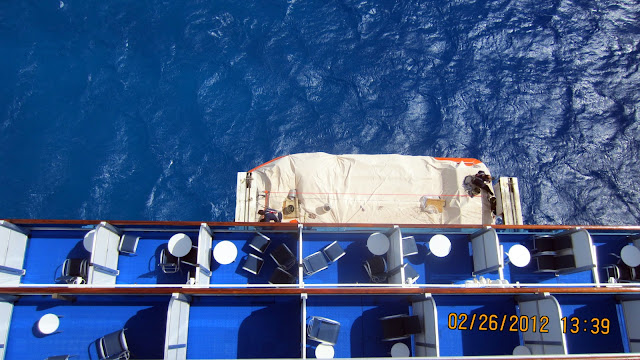 The cruise industry has always taken great care of the safety equipment, but since the incredibly stupid tragedy of the Costa Concordia, I'm sure efforts to prevent any future tragedies have intensified. It was bad enough to happen to the Italian ship, but if that happened to a U.S. Cruise company, or one that departed from a U.S. Port, it would cripple the industry faster than rising fuel prices.

You are allowed to bring one bottle of wine per person on board when you initially embark, but the “Corkage Fee” is a stunning $18. So, either bring your own corkscrew, or do as we have learned and simply pack a wine box, carefully wrapped in leak-proof plastic so as not to spoil your vacation in case of dropped luggage. Easy to open, and easy to lock back up in the suitcase away from the maid when you are out of the room. The wine box actually exceeds the one bottle limit but no one checks the volume. Anything to help alleviate the pain.

We always book as high as we can afford, and as far forward as possible. We have heard arguments from people who prefer to stay as close to the center of the ship as possible to minimize the effect of ship rolling, but with the modern stabilizers and computer control, we have found engine vibration to be a bigger pain in the enjoyment than the ship's motion. The higher, the quieter, and for more reasons than just being as far from the power plants as possible.

One of the reasons we like being as high as possible is because of a guy we will always call “Pickle Dick.” Luckily for us, Pickle Dick's cabin was below us when we met him on the last cruise. He loved to stand on his balcony and harass a young, newly-wed couple obviously trying to enjoy a romantic honeymoon. They were unfortunately just below him, and even worse, their balcony protruded further out than those above them. When ever the love birds would set up an intimate dinner with flowers and wine, Pickle Dick would show up, usually stark-ass naked, and start a loud, obnoxious scene, pretending to be a “friendly neighbor.” We never saw the young couple after Pickle Dick's second obnoxious intrusion, but that didn't stop our tattooed, long-haired ambassador of southern hospitality from standing on his tip-toes, peering over the rail trying to see where they were.

So, if you have a balcony stateroom and decide to enjoy your beautiful, unobstructed view of the ocean, remember to look up before standing out there bare-ass.

Next: Day Two at Sea