The Cruise to Aruba - On to Aruba 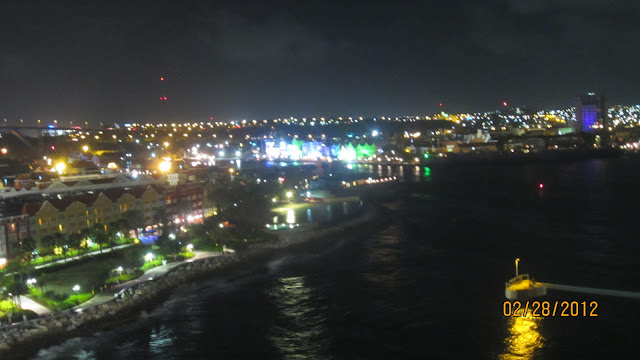 Punda, the heart of the old city is gaily lighted with reds, blues, and greens as dusk settles over Willemstad, Curaçao. We ate another marvelous dinner on the ship and decided to just relax on the ship and not go back into town.  We later stood on the top deck taking in one last view of the pretty city before going to the ship's theater and watching another one of the great shows, the ship's company version of “Motor City.”  This time the dancers had a flat, level stage to perform on! I still don't see how they do it in heavy seas! 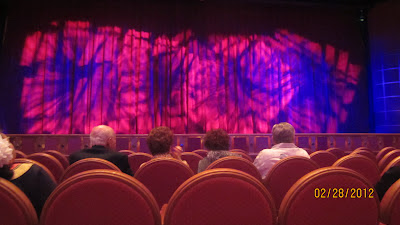 We headed back up top after the show to catch our last glimpse of Willemstad as we cast off and headed toward our morning arrival in near-by Aruba. This departure was quite different from our last port departure on a Princess ship when we left San Juan on the Star Princess some eight years before. On that trip, we were adjacent to a Carnival Cruise lines ship that blared party music almost non-stop. The Star Princess was comatose by comparison. When we finally slid out of our berth late that night, it was if the Star Princess was trying to slip out of a party without being noticed. While the revelers next door waved goodbye, we slipped silently and morosely out into the dark harbor. We nick-named that cruise the “Geritol Cruise.”

This one was different. We think it was the work of an energetic young woman we met back on day one when I stopped her on a staircase and asked some inane question about the ship, like, where could I get writing material. She cheerfully helped as much as possible, and before being swept away by the throngs that surrounded her. It turned out to be Lisa Ball, the ship's cruise director. The “company” part of the cruise was really enjoyable because of her.

To me there are two main parts to cruising: the “natural” part, ie, ocean, sky, weather, the enjoyment that comes without any outside influence, and the “company” part, which includes music, dancing, dining, and entertainment, the part that is supplied or created by the ship. On the Star Princess, the “natural” part was outstanding, the “company” part left a lot to be desired. Not so on the Crown Princess, we enjoyed all parts of the cruise, and even really didn't mind the rocking and rolling of the heavy seas. Part of the experience.

The good news was we enjoyed the “company” part of the cruise this time as well, and the departure from Willemstad was a showcase for Lisa Ball's efforts. A huge banner was hung across the top railings of the pool deck that proclaimed “The Ultimate Deck Party,” which usually is a warning for poor, loud music, and confused drinkers who aimlessly wander around looking for something that vaguely looks like a party. This one was a model for how to throw a deck party properly. 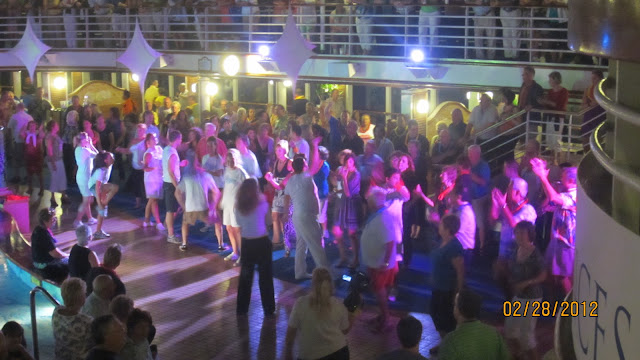 When Lisa took the microphone on the deck below us (we stayed one deck above the pool deck) and enthusiastically welcomed everyone to the world's greatest deck party, we realized the group of young, good looking people behind her were the ship's dancers who had changed into casual clothes. Lisa started the dancing by encouraging everyone around her to follow her lead. Soon the whole side of the pool she was on was dancing in rhythm, clapping their hands and really getting into the spirit of the party. As more and more passengers joined in the dancing, more of the ship's dancers faded away, and soon, the whole pool deck was a mass of dancing passengers. 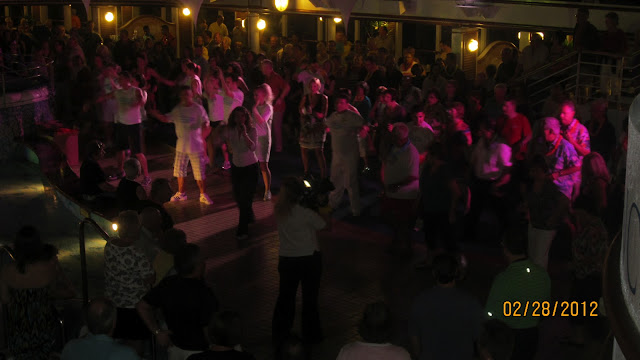 Great stuff, lead by the assistant cruise staff who had stepped in as lead dancers for the entire deck. By the time they got to the conga line, by now with a live band, there were well over several hundred passengers enjoying themselves. A great wrap up to a great day. My wife and I ended up in a piano bar listening to really good jazz and a great vocalist, the very things we missed on our last trip. You couldn't tell we were under way as we quietly sailed northward at 11 knots with trailing wind and a following sea. It is only 100 miles or so to Aruba.  No rush, we would be there by 8:00am.

Both parts of the cruise were in harmony.