Watching Miami disappear behind us as we cleared Government Cut in the softening evening light was a strange feeling. I barely recognize my hometown. The changes have been massive since I retired some seventeen years ago and moved to Florida's west coast. I walked downtown Miami for many years carrying a tool-case, servicing IBM terminals and keypunches in an era long gone. The Centrust building used to be on the south side of the skyscrapers that dominated downtown Miami. Today, it is on the north side of town as Brickell and the entire area south of the Miami River have grown into a new metropolis that gives my hometown a whole new, unfamiliar profile.


Gone also are the twin-engine seaplanes from Chalk's that used to take off alongside the departing cruise ships. The parade of departing ships has changed as well, dominated today by cruise ships that dwarf the cruise ships of twenty-five years ago.

Miami is still one of my favorite cities, and without doubt one of the most unique in the United States. I don't miss the traffic, though, and the parallel MacArthur Causeway headed into South Beach was a sobering reminder of weekday urban America. 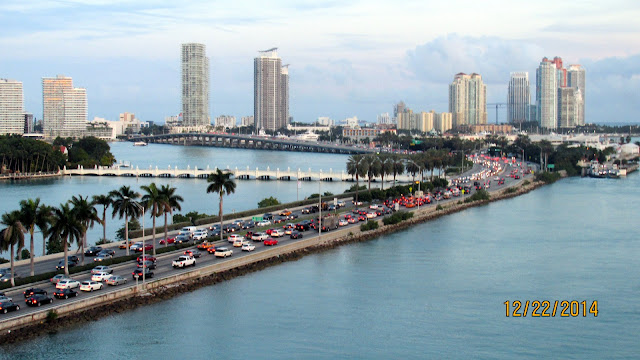 We watched the Florida coastline fade into the peach-colored distance from the top deck, then headed down to the Palace Dining room for our first dinner using the freestyle approach. The pleasant hostess led us to a table and our server approached us as we were seated. The dining experience on the first night is usually laid back, informal, as many passengers haven't received their luggage by dinner time, and we were no exception. Ilse's suitcase arrived shortly before we shoved off, but mine was, ah, diverted by the x-ray machine and set aside for physical examination. I went to dinner wearing the same bluejeans and walking shoes I wore all day, while Ilse freshened up and changed into more appropriate clothes.

Everything seemed normal, the server was a sweet Filipino girl named Irish, and the menu had the items we've come to expect, so we ordered the French onion soup with Gruyère cheese with great expectations. We were startled to have our soup bowls placed in front of us with a small piece of dark bread floating in the soup with no trace of cheese. Closer examination proved there weren't any onions, either, only broth. I went to the Maitre D' and asked him to join us at our table. I pointed out the soup had a serious problem, quite expecting him to be surprised, quite possibly upset at this travesty that could possibly threaten Norwegian Cruise Lines reputation of fine dining. Well, our opinion of it at any rate. The Maitre D' reached across my plate, took a fork from my table setting and flipped the bread over, exposing a white splotch on the center of the bread.

I looked at the piece of bread more closely. The splotch of melted cheese was about the size of a tablespoon. Astonished, I waited for another comment, but he was quite finished.

"Things certainly have changed, haven't they?" I asked as I sat back down at the table. Irish seemed to be far more embarrassed than our Maitre D' and quickly removed the soup. We ordered a Caesar salad as a substitute and were once again stunned by the lack of quality. Two croûtons, each about the size of an end piece of French bread, hard as a rock, among lettuce that was way past being fresh. Ilse and I sat staring at each other across the table. What has cruising come to, we thought.

For the first time ever on a cruise ship, I sent a dinner back. It tasted like a prepackaged piece of a poor quality meat "product" I once sampled at a shopper's warehouse. I actually sent two dinners back this cruise and can honestly say I only ate one meal I thoroughly enjoyed the entire cruise, and that was at lunch the third day when I had a custom-made pasta dish.

Apparently our Maitre D' had a change of heart as he returned and offered us a bottle of wine to make up for our displeasure. We accepted the wine but it didn't make our Braised Beef and spaetzle any more palatable. We both had indigestion well into the night, even after taking Pepto-Bismol, the first time we have ever used it even though we always take it for emergencies. To make us more at ease, our Maitre D' offered us reservations with the same server for the next evening's seating, something not usually done with Freestyle dining. Irish turned out to be one of the highlights of the trip and convinced us traditional dining is something we much prefer to the unassigned format of Freestyle cruising.


The disadvantage of the shorter cruises for us is we miss most of what we enjoy about cruising; sitting on our balcony enjoying the vast expanse of open ocean. Most of the cruising in the Bahamas is done at night. The distances between Bahamian islands are so short the ship's speed rarely exceeds ten or twelve knots, about half of its full cruising speed, and the schedules are set so the ship is in port during the day. Cruise ships usually are out of home port by dusk, headed for their first destination, and ours will be Great Stirrup Cay, an island in the Berry Islands used for picnicking and snorkeling.

After slowly toodling along, we will arrive at Great Stirrup Cay, only 150 miles away, by daybreak. After a day at the private island, we'll cast off at dusk to be in Nassau by sunrise the following day. Again there is no need to rush, it's only a 55 mile trip to Nassau. The ship quietly loafs along at a computer-controlled seven knots or so, saving fuel and arriving in time to pick up the mandatory harbor pilot right at day break. We'll be out of Nassau at sunset for the overnight trundle to Freeport at Grand Bahama. This was the only part of the cruise the ship got even close to half speed. as we closed the 130 miles to Freeport. Freeport back to Miami is only 110 miles. 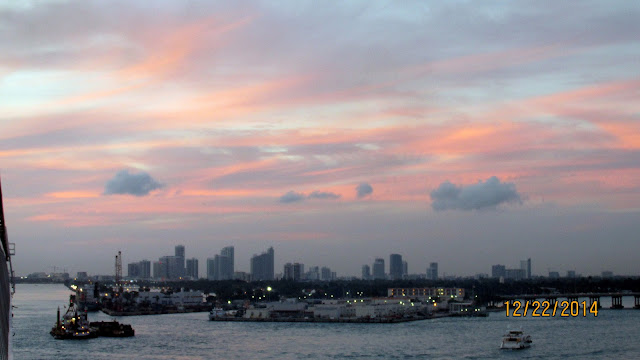