We slept the first night with the balcony door open as we slowly cruised from Miami toward Great Stirrup Cay, listening to the ocean and enjoying the cool salt air. We were on the top floor of the M/S Norwegian Sky, only a few cabins from the bow, as we always reserve a balcony room as high and as far forward as possible. We awoke to the sound of the forward anchor being lowered into the Northwest Providence Channel a few hundred yards off NCL's private island. I walked onto the balcony and watched as two Royal Caribbean Cruise Line ships anchored to the west at the nearby Coco Cay. 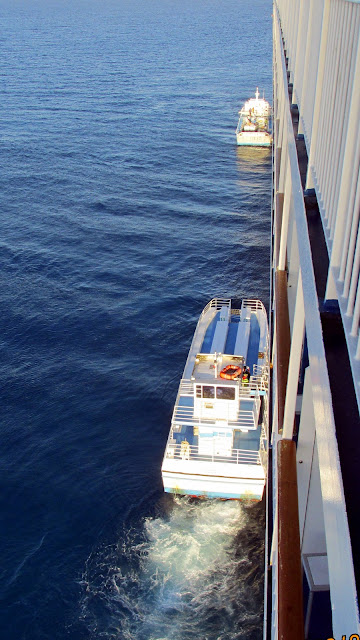 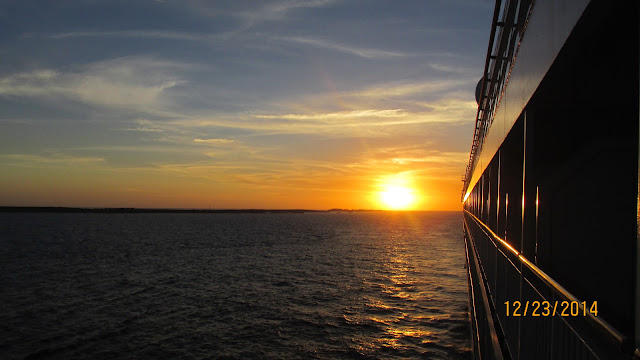 Both are islands used as private islands for the enjoyment of the cruise passengers who want to relax on a sandy beach and snorkel or take advantage of other barbecue-type activities along with the other two thousand or so passengers. Or, in RCCL's case with two ships visiting simultaneously, with four thousand sun-deprived passengers waiting to soak in the sun's rays. With three ships at anchor, the two private islands will handle about five or six thousand people for a quiet, private day at the beach. If I were on-line, I'd put a smiley face emoticon, oh, sorry, emoji, here.

When we visited the NCL island on the S/S Norway in 1992, she lowered her own tenders to ferry passengers to the beach, but today the tenders are based on the island and greet the ship soon after it drops anchor. The first tender headed to the island loaded with boxes of food and drink before the cruise director announced passengers could board the tenders for the trip to the island.

Ilse and I have been to the island twice, but would rather spend time on board with the ship all to ourselves while the multitudes enjoy the beach and the hot dogs. Being Floridians, the December water is too cold for us anyway. This is when we normally enjoy the buffet as the ship is almost empty. I won't belabor the poor quality of the food we had on this ship and that includes the buffet, but after dumping a cold pizza, I finally had a great pasta lunch custom made while I waited by myself in an almost empty dining room. Ilse, unfortunately, had to go to the other side of the ship to find coffee cream.

We anticipated a ship full of retirees escaping the commercialism or family commitments of Christmas, but there were few couples our age on the ship by themselves. Much to our surprise, this four-day holiday cruise appealed to families, lots of them. There were many people our age on board, but traveling as grandparents with their entire families. Children – 360 of the 2000 passengers were below the age of 21 – drove the average age on this cruise to only 36 years old. It appears families chose this cruise because of the timing of the cruise during the Christmas holidays as much as the freestyle of dining offered by NCL.

Many of the families were Asian, with a large contingent of Chinese passengers from Peking University who held a conference on board during the cruise. Without doubt, this was the most diverse group we've ever sailed with. The kids were no problem, we hardly knew they were on board. During the welcoming stage show in the ship's theater the first night, a bottle of champagne was presented to a couple celebrating their 68th anniversary. Yet another couple had their 53rd, while Ilse and I tied with several others with our 50th anniversary. Freestyle dining certainly appeals to the family cruisers, while the more structured formal style appeals to older passengers traveling as couples or peer groups.


One other aspect of this cruise intrigued me: the casino. For most of the cruise the nicely decorated casino was fairly empty, most of the poker tables had dealers anxiously waiting for players who never showed up. I haven't played poker since Texas Hold' Em became the game of preference, but then again, I'm not really a gambler. The lack of customers was probably because of the overwhelming number of families on board, or perhaps even the new unpopular electronic slot machines. I talked with several people who actually miss pulling the handle on the old mechanical slot machines, but the biggest complaint was the complexity of the new slot machines. Too many windows and too many gimmicks. Less and less chance to win, even if it was only two cherries. Most slot players seem to yearn for the old style machines, but, cest la vie, damn the consumer, full speed ahead.


We quietly slipped into the night leaving Great Stirrup Cay behind us, and slowly trundled along to Nassau. We arrived just at daybreak on Christmas Eve and were greeted by two ships already at berth. That would mean somewhere around 4000 extra people walking around town.


Ilse and I took our time eating breakfast and watching the crowd disembark. We liked Nassau the last time we were here, and we were anxious to see if we would enjoy it as much this time. We immediately headed for the area beyond Bay Street and the shoppers.  After walking three miles – Ilse took her pedometer - we headed back to the boat, but not until we stopped by the new Straw Market and bought a new hat.

We were astonished at how high prices were in Nassau. They've always been geared to the tourist trade, but there were few bargains to be had in town. Few shoppers carried bags back to the boat. Items for sale on the ship were far more reasonable than in Nassau. 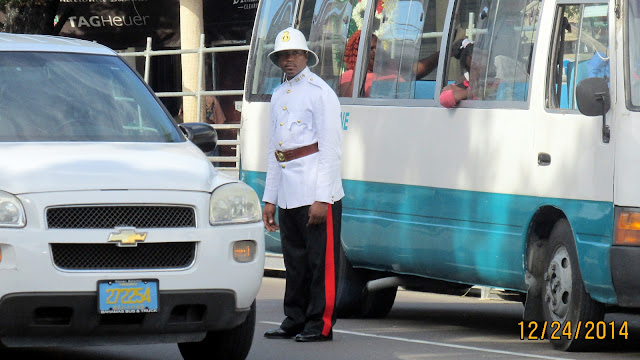 Nassau was gearing up for the annual Junkanoo street parade and Bay Street was already set up with bleachers for the Boxing Day - the day after Christmas - celebration. The cruise ships no longer leave Nassau late at night, so evening events and side excursions to the casino at Cable Beach for late shows weren't on this trip's agenda. Many of the passengers spent the day at Atlantis swimming with the dolphins or one of the many other side excursions. The perfect weather could have been ordered by the Chamber of Commerce, but was beginning to change as we headed back north toward Freeport.

I could rant about the quality of the food on this cruise even more, believe me, it got worse, but first, I need to explain on our last cruise, with Princess Cruises, I was so impressed with the quality of the dining room food I bought the coffee table book Courses – A Culinary Journey offered during the galley tour. I should donate it to Norwegian Cruise Lines, they could use it. 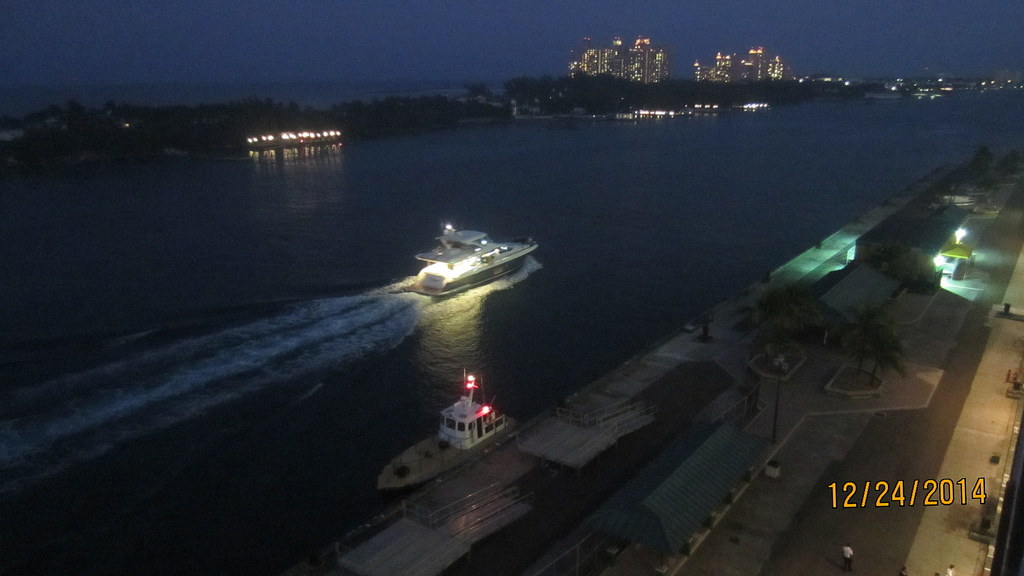 The shows were really great, with talented dancers and singers performing some really outstanding productions. On-board shows have become an art form of their own and are a highlight of cruising today. We really enjoyed when they integrated fifty or so of the passenger's children into the Christmas special.

Next stop; Christmas in Freeport