I stepped off my bathroom scale and stared at the digital readout. It had to be wrong, so I tried again. It was exactly the same weight as it was five days before, the morning we left on our four-day Caribbean cruise. The scale must be broken. My wife tried it and was astonished to see her weight, obviously quite different from mine, was also the same as before we left on our holiday cruise. We were both within ounces of what we weighed before embarking on a four-day holiday cruise to the Bahamas. Unheard of; cruising and not gaining weight!

My wife and I decided to do a nostalgic holiday cruise exactly twenty-five years after our first, memorable first cruise on board the MS Sunward II. The cruise was to be exactly the same itinerary as our original venture, but this would be aboard the on the MS Norwegian Sky, also on Norwegian Cruise Line. We anticipated a memorable cruise revisiting fond memories. We also expected to gain weight, something we've done every cruise we've taken, but we didn't gain a pound this time because, quite frankly, for the first cruise ever, the food just wasn't very good. In fact, it was awful! 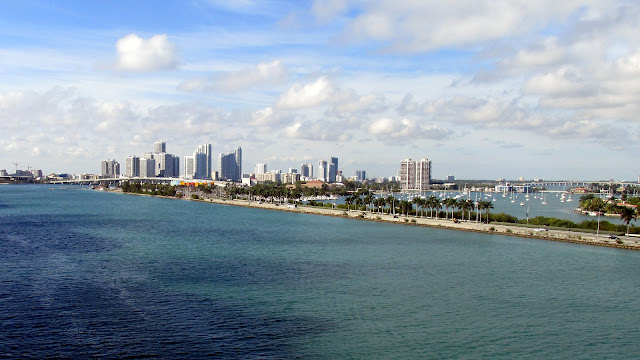 We give names to our cruises, such as the cruise aboard the Star Princess when we silently, surreptitiously, sailed out of San Juan at midnight while the adjacent Carnival ship was in the midst of a lively, raucous departure party. We called that one the "Geritol" cruise. When we last sailed on NCL aboard the Seaward, they ran out of sugar packets as we left Cozumel headed back to Miami with a full day at sea ahead of us. We called that one the "Sugar" cruise. We'll call this one the "French Onion Soup" cruise. The French Onion Soup served as the precursor to our first evening meal in the Palace Dining Room was a real eye opener. It set the tone for the rest of the cruise.

All cruise ships we've sailed on had a buffet lunch for arriving passengers as they boarded the ship. Boarding goes on for several hours and rooms are rarely ready for occupancy until later in the day, so it's easier just to grab a quick lunch and sit on the deck with your carry-on luggage as the ship fills up. The lunch buffet on the Sky reminded me more of my high school cafeteria than of a cruise ship.


This arrival buffet was limited to French fries, hot dogs, rolls, and a pressed meat patty of some kind. There were a few unappetizing pieces of melon scattered around one tray and I bravely picked the best looking pieces. I let the tasteless pressed meat patty that passed for a hamburger/meatloaf go without comment. I didn't eat all of it, or the stale bun that came with it, even though I was hungry. I did eat the melon. The French fries were only luke-warm and limp, bland and unappetizing. They were nothing, however, compared to what waited for us in the main dining room later for our first dinner. I devote the next chapter to that eye-opening experience. To say cruising has changed since we first started is an understatement. Concierge has been renamed to Customer Services, and that in itself explains where the cruise business is going.

It was a very memorable cruise, but not for the right reasons. I could judge the overall quality of the food served this entire cruise by describing my lunch on the second day, which was a cold tuna salad sandwich. The roll was quite cold and very stale, but the tuna salad wasn't bad. So, I scraped the tuna off and ate it with a fork. If I judge the cruise by the tuna salad, it really wasn't too bad, but if I judge it by the roll, I'd say I wasted my $1938.31.

I knew the MS Norwegian Sky was an older ship, she is sixteen years old, built in 1999, and sailed for four years as the Pride of Aloha during the 2000's before becoming the prime hauler for the Nassau/Freeport, Stirrup Cay itinerary of three and four day cruises for Norwegian Cruise Lines sailing from Miami, but we were unprepared for rust on the balcony or on railings around the ship. 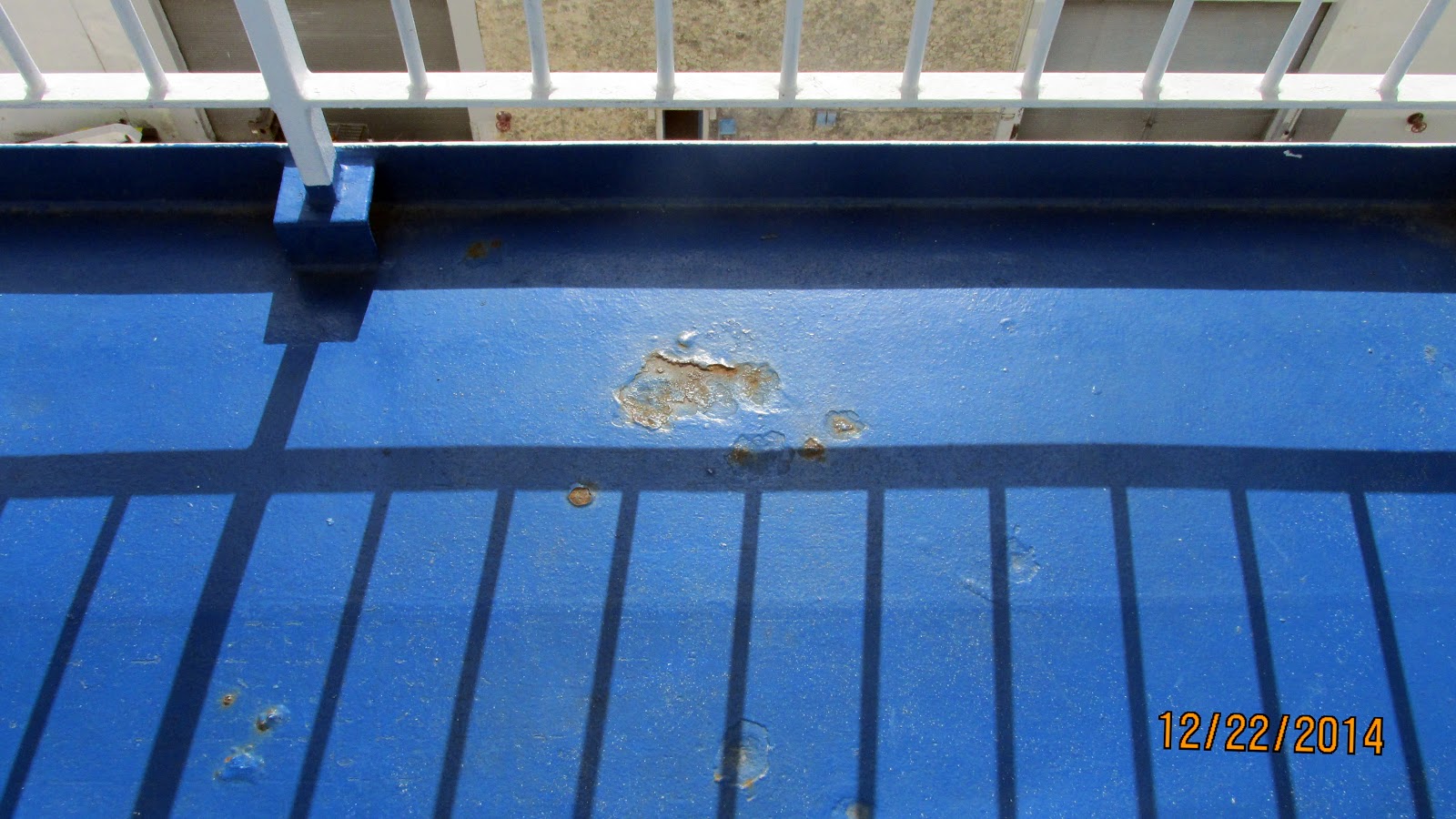 The cabin was clean, and the complimentary bar was well stocked, but at their unreasonable prices it wouldn't be touched for the duration of the cruise. However, under the new concept of cheap cruising, all shampoo and sink and shower soap is now in mounted dispensers, with no conditioner, and a message asking passengers to help with the environment by possibly reusing their towels! Reusing their towels was voluntary, of course.


The mandatory lifeboat drill was no different. It was the first lifeboat drill we've attended where we were asked not to bring life jackets. We thought, "Well, this should go quickly!" Another assumption that proved to be wrong. After half an hour of shoving and shuffling passengers – tallest to the rear, move over please, no, he's taller, please step behind her, please don't block the short ones, move to the back, everyone get closer together please, closer, closer! – we heard an announcement on the ship's PA system that the ship had just had a minor fire down by the incinerator. Nothing to worry about, though, the Captain said. Most of the sweaty, agitated passengers simply rolled their eyes at the fire announcement, while some, quite baffled, wondered whether or not they should stay outside and prepare to abandon ship. It would have been easier to do then as we were still moored to the dock. To think adrenaline-fired passengers are going to line up according to height when trying to get off a sinking ship boggles the mind.  Today's cruising has lost contact with reality.

We have friends we have been trying to get on cruise ships for years, I'm afraid they would have abandoned ship before we even cast off. 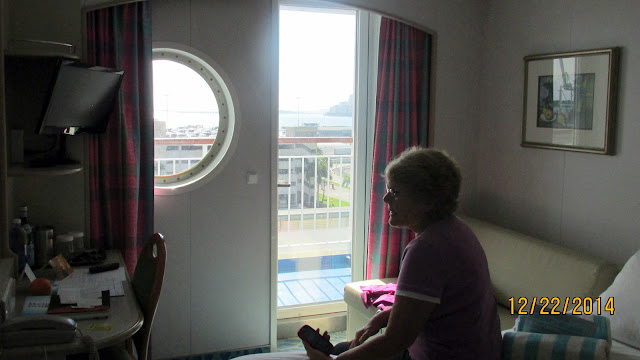 But then again, they probably wouldn't have traveled with us if they had known we were smugglers.

We checked two suitcases on boarding, Ilse's smaller one and mine, which had a box of wine wrapped in plastic placed in the bottom. It's against the rules to bring your own alcohol or wine on board ship on Norwegian Cruise Lines. We were allowed to bring one bottle of wine per person on board when embarked on the M/S Crown Princess only two years earlier. The “Corkage Fee” was $18 on that cruise, so either bring your own corkscrew as many do, or do as we have learned and simply pack a wine box, carefully wrapped in leak-proof plastic so as not to spoil your vacation in case of dropped luggage. Easy to open, and easy to lock back up in the suitcase away from the maid when you are out of the room. The wine box actually exceeds the one bottle limit but no one checks the volume. Anything to help alleviate the pain. But this was Norwegian Cruise Lines with different rules.

Getting caught was only fair as we were warned by the brochure beforehand. We tried it anyway but knew something was up when Ilse's suitcase was delivered to the room shortly after the life boat drill, but not mine. Not a good sign as they were turned in together.

My suitcase was standing in front of our cabin door when we returned from dinner later in the evening, with a piece of red tape labeled "Liquor" wrapped around the bottom. On the bed was a letter that stated if I wanted to reclaim my confiscated liquor, I could go to a specific location at a specified time to pick it up.

So, with letter in hand, we went to retrieve our $16 dollar box of Cabernet Sauvignon at the designated time. The confused steward who took my letter looked through no less than five bins of confiscated alcohol looking for our wine. He had never seen wine in a box before. We told him it comes in handy when traveling, but all we got was a blank stare.

When he finally retrieved our wine, he informed us we could have it to take to our room if we paid the $45 corking fee, or we could wait to claim it when we got off the ship at the end of the cruise. We bid adieu to our wine until Friday when would carry it home.


We may rename this cruise Smuggler's Blues cruise.

Next:  A new dining experience: dining on the Norwegian Sky