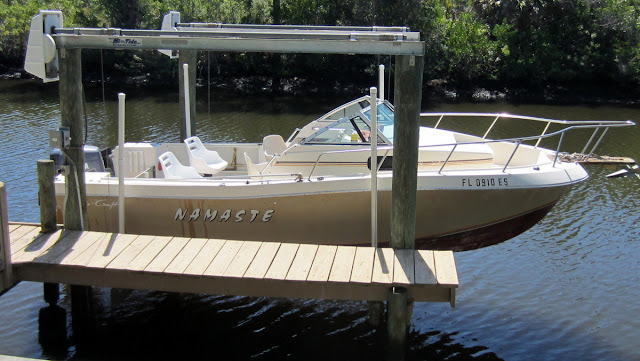 An old friend just proved an often heard adage is not quite right. It's been said the two happiest days of a boater's life are when he buys his first boat, and when he sells it. We just sold our old friend, Namasté, our 21 foot Chris Craft and we honestly say it was not a really happy day. We had many good times on the boat, and learned a lot about the west coast of Florida in the process. It wasn't always fun, though, but we will miss her. She was safe and secure in rough seas, and at home in a three foot chop as any small craft I've been in. She was dry under full throttle even though an occasional rogue wave could drench the cockpit. Namasté was at home just about anywhere on the water. When we picked her up, we thought her exquisite, aesthetically perfect lines were prettier than any boat we had seen. There was one major problem, we had to rename her. 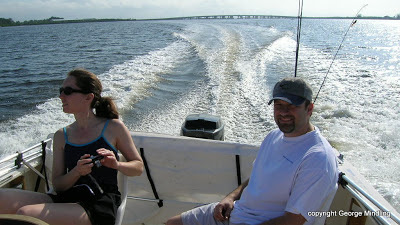 Blazoned across her mustard colored hull was the huge white lettered name “Whim Wham.” Great, just the boat you want to take your grandkids out in. We bought her from a fellow in Punta Gorda who looked like he hadn't named her. He hadn't. Really, he looked more accountant than swashbuckler. He was the second owner. The first owner probably died of VD or rampant alcoholism, but we liked the boat in spite of the name and brought her home across Charlotte Harbor towing a six foot dinghy that was included in the deal. That was luckily included in the deal, I should say, as I sat in it for an hour while I unbent an unmarked, wire crab trap by hand from around the propeller. Lesson: never venture out without a tool kit and avoid bleeding in shark infested waters. Actually, the alligators keep the sharks away in the Myakka River, but my hands were pretty well lacerated by the time we finally got underway. When we finally got her home, I tied her to a neighbor's dock while we had a boat lift and a seawall installed. The day she was lifted into place was indeed a happy day. 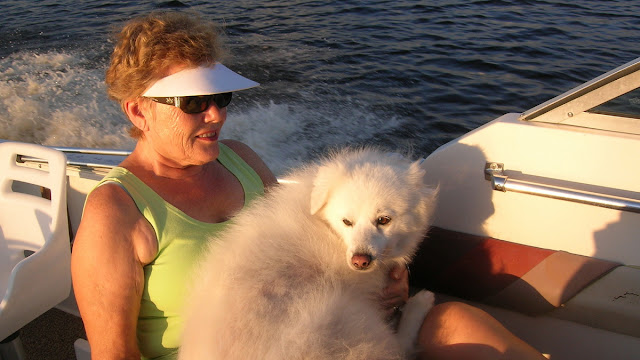 We took trips to Cabbage Key and through Boca Grande pass, exploring Charlotte Harbor and the Peace River without worrying about expending the 80 gallons of fuel we carried. Of course, gasoline was only a buck and a quarter a gallon back then, and we didn't have the destructive ethanol additive to worry about. Gas tanks and carburetors stayed clean and we ran just fine. As the price of gasoline crept up, our trips got shorter. And slower. But the noisy, thirsty 200 horse power Mercury Black Max outboard motor had developed another problem: it was becoming unreliable. We had to make a decision about the boat: fix the motor or replace it, or possibly even the boat. I borrowed a trailer big enough to handle our 3500 pound baby and hauled her into the yard next to the house in the spring of 2006. I rebuilt the carburetors and replaced ignition coils. I swore in frustration as love bugs got sucked into the open carburetor throats and stalled the engine. I replaced all the chrome hardware that had deteriorated from the exposure to salt water, including all the hinges and cleats, and meticulously, gently removed the name. She only came with two seats, so I installed two more in the stern. I replaced the Bimini top with a new, longer top. After cleaning and waxing the hull, I carefully applied her new name, Namasté. After six weeks of work, we relaunched her only to find the engine problem hadn't been fixed. Out she came again and this time I tore all the wiring out and rewired the entire engine. Finally she was put back in the water and she started up and ran the way she had when we brought her home, but she was as noisy as ever.

People a block away could hear her when I started her, and conversation on board, even while we were at idle, was out of the question. We actually took cotton wads for our ears with us on one trip, but they were no help. I decided the next time the motor gave us problems, it was coming off. Two years later we pulled off the Black Max and installed a rebuilt Yamaha 200 hp outboard motor. It was like night and day! We had our old boat back! Unfortunately, the price of gas soon went to 4 dollars a gallon and we found ourselves in a quandary, we couldn't afford to take her out every time we wanted. A full gas tank was worth $320! We finally had a quieter, reliable engine, but no place to go.

We continued to take her out though, sometimes with fishing friends, sometimes with guests to see if we could find Dolphins. Still, when we had more than four guests, we had to take a fold up lawn chair placed in the center at the stern. We had one poignant trip when we asked dear friends to join us for a sun-down cruise to the river. Their adult son was dying from cancer, so the trip was special for all of us. In a cruel turn of fate, his mother and father were also gone within a year.

In a memorable return trip down the Peace River from visiting the Navigator restaurant with friends from Germany, we passed under the Blue Angels as they performed for a near-by air show.  I saluted the blue F-18 as he leveled out just above the water off our starboard bow and he returned the honor with a wing waggle as he passed a few feet over head.

We will miss our old friend, but we have a new one coming next week to take her spot on the boat lift. The new boat doesn't have the beautiful, sleek lines of the old Chris Craft. Rather it looks like a utilitarian barge. Her replacement is a pontoon boat. With only a new four-stroke 70 horsepower motor, our fuel consumption should be cut in half and we will be able to carry on normal conversations at idle. It has comfortable seating for eight people. We started with a small 22 foot sail boat, then made the jump to our big power boat. The new one should fit somewhere in the middle.

Another old boating adage says power boats are going somewhere but sailboats are already there. The new boat will nicely fit both worlds. We'll call her Namasté II.  It couldn't have a better name. 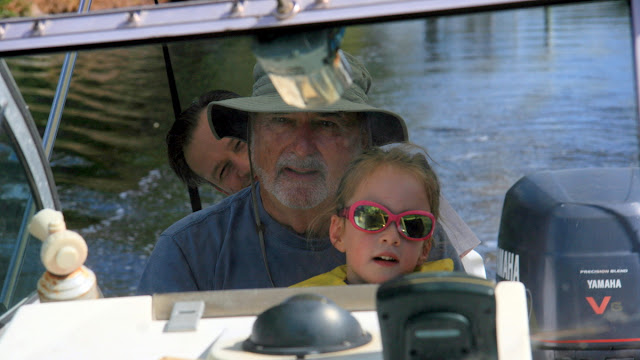