Not this time! No way could I out-run the storm! We saw it behind us as we left the dock on the Jupiter Waterway and slowly headed for the Myakka River in our brand new pontoon boat. It wasn't a threat then, but it soon became a challenge. 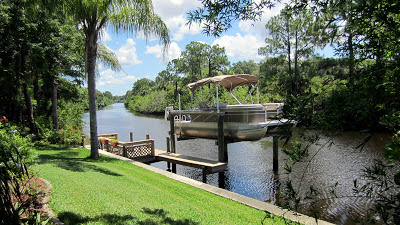 We naively invited friends who were visiting us for the first time to join us on our maiden voyage. It was the very first time we cast off from home since bringing the new 20 foot Bennington pontoon boat home. We were to have dinner with our first-time guests, but before we ate, I convinced everyone to join us for a thirty-minute cruise to the nearby river to see the beauty of our area. I even talked one of our guests out of changing her beautiful new shoes as I convinced her all she would do is sit on the new luxurious seats and drink wine!

I glanced at the latest weather radar before asking everyone to cruise with us, and saw a small weather blip way up north, headed away, so I thought we would be fine. As we left the dock, Ilse poked me and said, “Look back! Do we need to worry?” 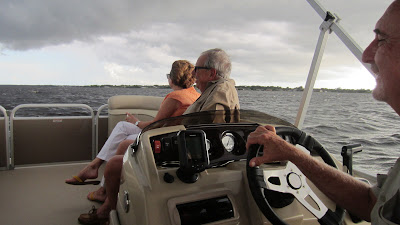 Dark clouds were forming on the horizon behind us, but the river ahead looked clear and bright. I thought I could go to the river and turn down stream and head toward the State Road 776 bridge which passes over the Myakka River just in case the small storm decided to head our way. Besides, radar showed it going east, away from us so we shouldn't have to worry. We have parked under bridges in the past while Florida torrential rain poured down harmlessly on either side of us. I thought if indeed the storm expanded to cover us, we would be safe under the bridge.

When we reached the river some twelve minutes later, the storm clouds covered twice as much of the northern sky behind us as when we started out. We were still in sunshine, but the ominous clouds obviously were not headed away. They were coming closer. The storm was expanding. As we left the slow speed zone of the waterway and turned into the Myakka river, I opened the throttle as far as I safely could as I was only into the second hour of the break-in period for the new Yamaha 70 horsepower outboard motor. It didn't matter. I could have run full throttle and we would not have made it. With three miles to go to the bridge, I realized I had made a bad mistake. I have made this trip for the last fifteen years in a 21 foot, deep-vee Chris Craft powered with a 200 horsepower motor. The old boat would plane easily and speeds around 35 miles an hour were a piece of cake. We would have been there in a matter of minutes. Unfortunately, I was no longer driving the fast Chris Craft. Nope, the new pontoon is a party barge, a displacement boat powered by a 70 horsepower motor. It will never plane, even if I put the 200 horsepower motor on it. After pushing as hard as possible for five minutes, I knew we wouldn't make it.  As I looked back, the entrance to the waterway was already obscured by rain. Damn! No going back now! 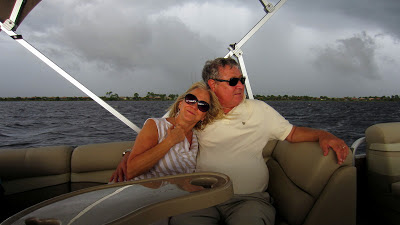 Rain blanketed the bend in the river as I tried in vain to get there first. Rain began to come down in sheets, teasingly leaving our small section of the river as the only dry section before all you-know-what let loose. And it did, from all sides. Our little Bimini top was absolutely no help! The seas picked up to a foot and a half, which in the Myakka River is impressive, and heavy rain pelted us as if to say, “See, smart ass!” One of my guests, water dripping from his glasses, made a supposedly humorous comment about my overall intelligence.

No argument there. This was without doubt the dumbest boating decision I have made in the 58 years I've been doing this. As we headed back I tried to keep the boat aimed so the Bimini top offered at least some protection from the wind-swept rain, but that didn't work well either. Everyone was drenched! Absolutely drenched! Pontoon boats offer absolutely no protection from the elements, and Florida summer rain storms are brutal. The only possible solution is to carry emergency wet weather gear for every one, even if it is only cheap plastic throw away rain covers, and water tight containers for the shoes. In the future, I will carry wet weather gear for everyone.

The new boat handled well, water sloshing over the bow with alarming regularity. I throttled back to minimize the effects of the rough seas, and slowly headed toward the channel markers that offered sanctuary from the torrential rain. As I turned back into the slow speed, no wake zone waterway some twenty, soaking-wet minutes later, still doing at a pretty good clip, for a pontoon boat with six adults on board, the rain began to let up. By the time we returned to our dock, the rain completely stopped, the only water spoiling the surface of the waterway was dripping off the tree leaves. 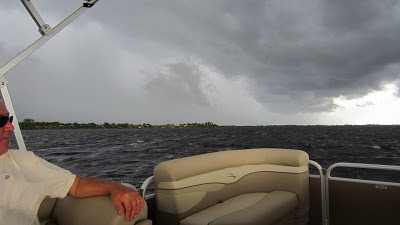 With all our guests drenched, I worried if any of them would even talk to me. After drying off, and another glass of wine, they departed to change clothes, and forty-five minutes later, they returned and we began the dinner where we left off. No harm done, except my ego, and at least one pair of water-logged shoes.
Posted by George at 5:08 PM