Daisy was never an outside dog. She would only stay outside with us as long as it was cool and she could lie in shade, usually under the big live-oak tree next to the house. She would much rather lie on the living room couch in the air-conditioning. Even then she would pant.

She hated the Florida heat. With her thick, white coat, she was better suited for Norway or some other Scandinavian country that really was her heritage as she appeared to be a mixed Spitz/Samoyed type. She was a rescue dog, and even the veterinarians weren't sure of her main breed. Our daughter, Monica, found her on a highway in Georgia during a rainstorm in early 2000. Someone simply dumped one of the sweetest dogs ever alongside the road. Probably because she was pregnant.
Monica named her Daisy, and the name suited her perfectly. After taking her to a vet and getting her neutered, she became part of Monica's household, at least until we lost our dog, Sasha.

Having a pet euthanized is incredibly difficult. We lost Sasha after almost fifteen years, and it was a difficult decision to make, and even a more difficult task to actually do. Watching a loved pet die in your arms is even worse, and that is what happened to our first dog, Tippy, a Beagle who died of kidney failure. Ilse and Monica did their best to comfort him and relieve his suffering, but it was incredibly difficult for both of them as they helplessly held him while he died an agonizing death. When Sasha, reached the point of being beyond help or recovery, we decided to have our veterinarian come to our house to end our fifteen year old mixed spaniel's difficulties. We didn't want to sit in any waiting room with our beloved pet, waiting for the inevitable nurse call and our veterinarian graciously complied.

It wasn't long after we lost Sasha that Monica called and said, “I have a dog for you!” We both said,
“No, it's too soon. We still miss Sasha and any new dog would just compete with our memory of her.”
“I'll send photos,” Monica said.
“Fine, but don't expect us to take her. We aren't ready.”


Daisy's first week at her new home was spent lying in the far corner of our lanai, simply staring at us. She ate without problem, and seemed to enjoy walking with us in the evening, but at night she slept in the living room with her muzzle on the low window sill. It took months before she began to show affection, but when she did, it was always on her terms. Nobody forced Daisy to do anything. Oh, she was well trained, she always followed commands, but as far as showing any kind of attachment, Daisy was a loner.

She rarely barked. She would announce anyone at the door, but that was it. We took her outside off leash after just several weeks, but we live on a waterway that runs into the Myakka River not far away, so we see alligators in the water behind the house regularly. We always checked the yard and banks before allowing her in our unfenced yard. 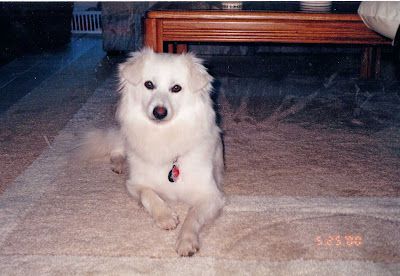 We found out she much preferred air conditioning to the fresh air of outdoors. She began sleeping closer to us, but only when she napped during the day. She was never aggressive. She could meet any dog at any time, and she would curiously say hello, then back away. Several years after we got her, she began to show signs of lethargy and lack of energy. She was diagnosed with a kidney problem that she lived with for years, and had a chronic thyroid problem that we gave her medicine twice a day to keep under control until the end. She also had the worst case of benign tumors of any dog our vet had ever seen. He took one off her side that required over twenty-five stitches.

One day while we were working in the yard, we noticed Daisy was laying under the Oak tree in a sphinx-like pose, looking down between her out-stretched paws. When we called her to come in, she looked at us, then looked down once again between her paws. Curious, we walked over to see what see was watching and were surprised to find she was protecting a baby squirrel. She would gently sniff it, then look at us as if to say “this baby needs help!” Daisy never barked in anger at anything, never once did we ever hear her growl.

None of her ailments stopped her from walking with us during the three months we camped across the eastern part of the country last year. She joined us on every trip, and walked hills and trails just like a young dog right to the very end.


We ended up with a second dog, Taz, a Golden Retriever mix who was the opposite of Daisy in every way, but Daisy adored him and he became her pack leader. Taz is finally realizing something's wrong three days after Daisy's death, but we're not sure if he understands why. He hasn't gone looking for her that we know of, but he's a different dog. His fast, active demeanor is gone. He actually looks and acts depressed. He is finally realizing his sweetheart isn't here any more. 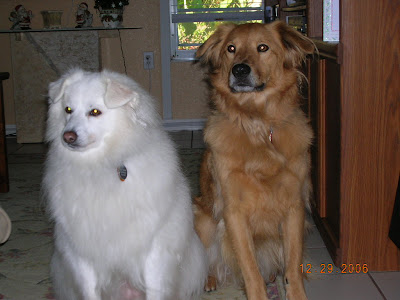