Poor Pithole Phyllis can't even get her name in the paper. Her cousin, Punxsutawney Phil, grabs headlines every February 2nd down at Gobbler's Knob, but not poor Phyllis. No one calls to ask her anything. Great-great-grandpa Phineas made the mistake of picking the wrong town when he dropped off the back of the slow-moving buggy at the edge of Pithole, Pennsylvania, way back in the fall of 1865. He thought he had picked a town that had real potential. Oil wells were popping up everywhere since Colonel Drake drilled his first well over by Titusville, just a short buggy ride away. With fifty-four hotels, three churches, a railroad, the very first oil-pipeline, and even a red light district, Pithole had grown into a real city. Yep, ol' Pithole was on the map! Phineas decided to stake his claim and grow roots in this bustling metropolis.

“Whoa Nelly, is this gonna be fun!” Phineas thought to himself as he waddled across Holmden Street. “We even got us a theater and a newspaper,” he mused, then scurried as fast as his four short legs would go to get out from under the flailing hoofs of the horses being ridden wildly through town. He looked back from under the safety of first wooden porch he came to.

Early the next morning Phineas waddled to the top of the highest hill to see what he could see, but all he could see were oil wells! The forests were gone. Even the cow pastures had been torn up to build big, ugly structures that looked like they would blow down in a storm. By the time Pithole had 20,000 residents just a few months later, poor Phineas and his new family were stuck deep in the woods, terrified to venture anywhere near the farmers on the outskirts of town who would shoot at them on sight, or anywhere near the smelly oil fields where they would get covered in the dark, sticky goo that just wouldn't come off. Phineas was in despair, how could he have been so wrong?

His brother, Percy, had warned him not to be so impetuous. Percy stayed in Punxsutawney, some seventy miles further south. “There are only a couple of thousand people here in our little town, and that's all we'll ever have,” Percy told Phineas. “There's no reason on earth for anybody to ever move here! We'll never be bothered with traffic and noise. Stay with us and we'll all grow old and fat together, my brother.” But Phineas would have none of it and jumped up on a passing buggy axle the first chance he had. Percy never saw Phineas again.

Percy became something of a local celebrity in Punxsutawney. He always seemed to be where ever there was a fresh crop of sweet corn, and never missed a ripe garden that was within five miles of town. Life was good in little Punxsutawney. Percy was in the process of living to a ripe old age when he was caught off-guard by a freak blizzard one day in early February while trying to make his way slowly up to Gobbler's Knob. He saw his shadow that morning and decided sunshine meant good weather. He loved lying in the sunshine, and decided the top of the Knob would be a great place to soak up the warm rays of the sun. Unfortunately, like most groundhogs, Percy just wasn't very fast, and his old age made him even slower. He was too far from his burrow when the cold sleet of a late winter storm snuck in and caught him in the middle of an open field. Percy struggled desperately, but finally exhausted, he fell still in the winter snow and froze to death. Percy's oldest son, Phil, swore they would never again get caught off guard by the weather. Every year since, on the exact anniversary of Percy's fatal journey, Phil cautiously sticks his head out of his relocated home near Gobbler's Knob and decides for all groundhogs everywhere if they get to sleep in for six more weeks.

Phineas always kept abreast of his prudent, rational brother through the fuel of all envy, gossip. The polecat family that lived down by the hollow always seemed to know everything. Phineas heard about poor Percy, but he didn't make the trip for the funeral. He was too proud to admit his brother had been right, his dreams had been just too grandiose. Phineas's family eventually suffered just like the ill-fated town. Twenty years after moving to Pithole, the town was gone, only a blur in the memory of a few. Phineas never went back to the hill.

His family endured for generations after he passed away, but just barely. Most of his offspring departed for places unknown. Only a handful of grandkids stayed in the empty, cold family burrows, devoid of laughter and mirth. Every year on the day poor Percy froze to death, the current Punxsutawney Phil gets his photo on the front page of every paper in the country. Even Brian Williams raises his eyebrows to new levels to show Phil the 6th, or 7th, maybe it's now the 8th, being held aloft for all to see. Poor Pithole Phyllis waddles back to her den and pulls the covers up. The farmers still shoot at them, and if they aren't careful, they'll get run over by one of the few cars that travel down the usually empty roads. Groundhog Day just isn't very special in Pithole. 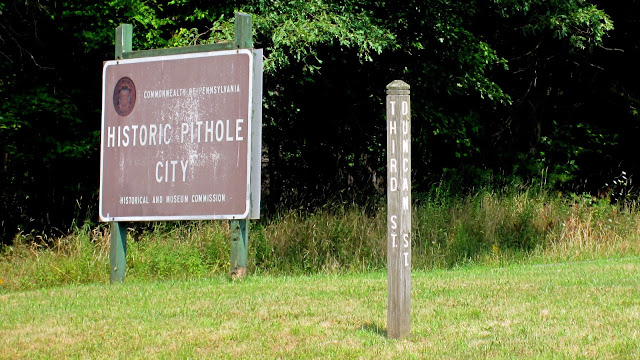