Ludwig and the Donkey

The Bauernhof looked astonishingly familiar. My memory can’t be held accountable after fifty years, but the old image of the farm just off the highway immediately popped into my mind as my wife and I turned sharply into the triangular courtyard at the bottom of the hill. The farmhouse was just over the small bridge of the minuscule River Nims, which in North Carolina would probably be called a creek, nestled between the highway which climbed up the hill from the bridge and a small farmer’s access road that ran along the river. I drove past it every day for three years on my way to and from work. 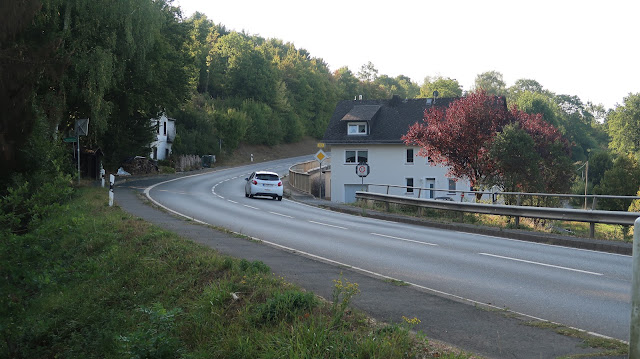 We were meeting Ludwig and Walburga Pax, our hosts for the next three weeks, a couple we had never met before. They were kind enough to let us stay with them as they had an empty apartment on the ground floor of the old, but completely refurbished farmhouse. The arrangements were made by friends of ours, another German couple, who decided they would help us enjoy the month we would spend in Bitburg, Germany, my wife’s hometown.

Our hosts were very cordial as my wife and I spent the first several days going and coming, shopping in town and catching up on old friendships. We also got to meet several people we had met on-line through Facebook. Ludwig and Walburga invited us to join them in their garden patio for a glass of wine and we immediately accepted. They had just returned from Tirol in Northern Italy where they celebrated their Silver Wedding anniversary and had arrived home the night before we got there. They were getting settled in as much as we were.

Even with my rusty German, bolstered by my wife’s translation skills, we were soon reminiscing about the old days when US Air Force trucks roared up the hill on their way to Bitburg Air Base, or further on to Idenheim, one of our two launch sites. The missile support area where I worked was several miles back up the highway in the other direction. The Pax farmhouse was directly adjacent to the two-lane highway that connected the areas. The traffic on the highway back then was sparse, usually local farmers headed toward Oberweis or the farming villages scattered in the area. Occasional Luxemburgers came across from nearby Vianden, but the parade of blue USAF trucks and the big, American cars of the officers and sergeants who worked at MSA or the other launch site we had at Rittersdorf were just as common as the black on white license plates of the local residents. In the several days we had been there, it was obvious things have changed.

The traffic was incessant up and down the hill. Trucks of all shapes and sizes from Belgium, Luxembourg, Germany and even France were common, and the license plates of the continual flow of cars and SUVs reflected the economic state of the European Union, which seems to be doing quite well. The traffic at night slacked off very little but the Pax’s newly rebuilt apartment had soundproof windows and window shades that insulated us completely from the outside world. While we were chatting about the differences between now and then, Ludwig laughed and told me about the Air Force truck that brought him a donkey.

Ludwig’s parents rented the apartment on the ground floor of the Bauernhof to an American family in the late fifties who often brought candy or gum for Ludwig. One afternoon the American asked Ludwig, who was six or seven at the time, if he wanted a bunny, a chicken, or a donkey. Young Ludwig said he’d rather have a donkey. Several days later, a blue Air Force truck towing a trailer showed up in their courtyard and unloaded a donkey, complete with a box of feed and blankets. His father apparently arranged with the American to house-keep the donkey, but Ludwig had no idea of how or why. Ludwig said he was very happy to get the Donkey.

I sat and listened to his story, my mind furiously spinning. I remembered posting a photograph on my web site of a donkey that had been brought back from Libya as a squadron mascot. It was taken from a squadron newspaper clipping in the late fifties and I suddenly remembered where to find it. I went inside and logged on to Ludwig’s W-lan – it’s not called WiFi in Germany – and pulled up the photo of the donkey. When I showed it to Ludwig, he was speechless. He went inside and came back out with a photo of him sitting on the donkey!

A Martin Company civilian named Bill Baily accompanied the 71st Tactical Missile Squadron to Wheelus Air Base in Libya as a Technical Representative during a live-fire exercise done annually by all of the tactical missile squadrons assigned to NATO. The exercises, called AMLO, or Annual Missile Launch Operation, were done from 1954 through early 1959, with thirty-six Matador missiles launched annually at an area sixteen miles from the Wheelus flight line. While on the 1959 exercise, Bailey somehow acquired a burro from a Libyan local near the launch area outside of Tripoli and managed not only to get it on the C-119 flight back to Bitburg, but also got the Squadron to adopt the animal as its mascot. Renamed to Mahl Ish from whatever it was called before, the new name supposedly reflected the phrase “mox nix,” the military bastardization of the German phrase “machts nicht,” roughly translated as “doesn’t matter.” Someone even had a blanket made, probably in Libya, with the burro’s new name across the top and the squadron insignia proudly emblazoned in the center. It would hard to imagine the 585th Tactical Missile Group commander, Col Fred Vetter, wasn’t in on the stunt as 1st Lt. Sherman J. Uchill was assigned as Mahl Ish’s custodian. 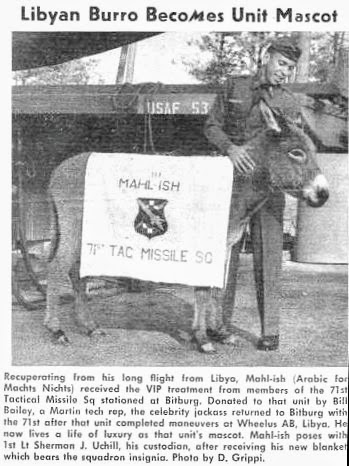 Ludwig did not remember the name of the American family his father rented to, but he remembered when the Air Police – since renamed to Security Police – knocked on the farm house door asking to speak with the renter. He produced documents about the burro that satisfied the police and they left, leaving the burro with the Pax family.

Ludwig remembered having the burro for several years, with the Air Force coming by every once in a while to pick up the animal for special events, but they always brought the animal back to the farm. He also remembered the burro getting out of his pen more than once, one time going all the way to the main street in Bitburg before his father found him.

Ludwig doesn't know the fate of the burro, only that one time the Air Force picked up the burro was the last time he saw it.

Determined to fill in the blanks, I asked Russ Reston, webmaster for the TAC Missileers Association if he could put a blurb on their site asking anyone for information about the mysterious squadron mascot. He put my odd request on the page and the next morning I had an answer from Mike Fedrick, a missileer who served with the 585th TMG from 1959 until 1962, the year I arrived in the group.

Mike wrote “I was in the 71st TMS from 1959 to 1962. The donkey was brought to Germany from Libya in 1959 by the last group to go to Libya for combat ready launches. The rest of us went to Cape Canaveral for launches.

“I got to know the donkey up close and personal. When the 585th Tac Missile Group had a summer picnic for dependent children, the group commander (Col. Vetter) had me pick it up from the German farmer that was taking care of it, load it into a weapons carrier, take it to the picnic, and lead it around with kids riding on it, load it back, and take it back to the German farmer. I was told I was chosen for this onerous task because I’m from Texas. My memories of this event are unpleasant because the donkey did not want to get into the weapons carrier, both when I picked it up and when we had to load it to take it back. The German farmer got it loaded the first time, but it took several of us to load it to take it back.

“I was told I was chosen for this onerous task because I’m from Texas. I’m actually good with horses, but never had to deal with a donkey before or after. As you know, Mox Nix means "makes no difference".

What a fantastic accounting George. Loved it. 🤩

Well written and very engaging. Although I don’t know where this exact location is, I love the comparison of a ‘river’ to a creek :)

Thanks George, I enjoyed the flashback in time.
Bob B

Great read! Thank you for posting this.

George, I was at the Idenheim launch pad complex in 1960 -61 after transferring over from Hahn. max