Our World: Smaller and Smaller

Vladimir was far more fastidious than I anticipated. I didn’t want to ride with him and Steve to Lakeland, some two hours away, but Vlad not only had on his face-mask, but also had anti-bacterial hand cleaner and hand wipes on the console of his immaculate, new Toyota pickup truck. The fresh, crisp protective paper mat on the floor of the backseat had never been trampled by anyone’s shoes.

Three of us in one vehicle meant breaking my own COVID-19 guidelines, but I was in this all the way and I wanted to see the project wrap up. We were going to move a MiG-21 fighter jet - left over from the Polish Air Force – from southwest Florida to the Indiana Military Museum in Vincennes, Indiana.

Steve and I made the trip a week earlier leading to our current venture. Technically, we were assisting Max Butler, a volunteer for the museum, lift a sixty year old Soviet-era fighter out of a storage yard and strap it to a trailer. Max arranged for a crane and a flat-bed trailer to do the real work, we were going to assist as much as possible although I’m sure the professional movers needed no supervision. Vladimir was coming along because Steve picked up a discarded ejection seat handle we found on the ground on our first trip to the project. Steve strapped the handle to a lawn chair for his Ukrainian neighbor after we got home as a joke. The handle instructions were of course written in Russian, and brought tears to Vlad’s eyes. Small world, Vlad had been a mechanic on this very type of airplane fifty years ago, when as a young man, he had been in the Soviet Air Force. When he found out we were headed back a second time, Vlad had to go with us.

Max had called me weeks earlier and asked if I could meet him at Draken International, an aviation firm that supplies contract military services from rebuilding and re-certifying ex-military aircraft to actually flying training missions for the US military. Draken was donating one of their old MiG-21 fighters located at the Lakeland airport to the Indiana Military Museum. All the museum had to do was come get the airplane. Max had as long a trip to Lakeland as I did, but from the other direction as he drove down from Eustis.

This wasn’t our first move for the military museum. We worked together ten years ago to move a CGM-13B Mace missile that required us to actually disassemble the missile.

Our tool bags weren’t required this time as the MiG already had the wings and tail section mounted on shipping frames. That was fine with me, being in my late seventies, I no longer turn wrenches if I don’t have to. Max, even though older than me, was as thorough as always and made wooden back-up frames and brackets for the trailer in case they were needed. I was really there for moral support. Almost like old times, except this time we were in the middle of the COVID-19 pandemic. 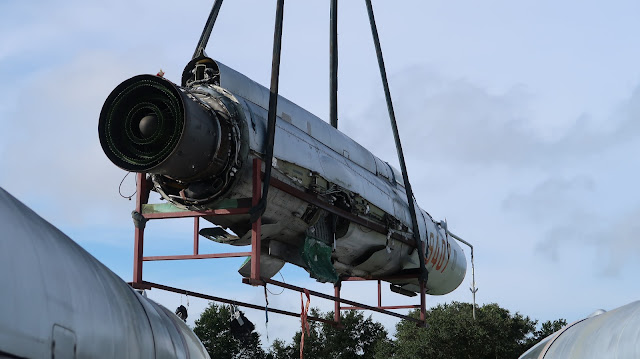 I was apprehensive about the trip at first, but with the proper precautions, it would be a break from the cabin-fever of the last six months of seclusion. My wife had reservations also, but she was as happy to have a day to herself as well. It is a small world indeed, as a friend we had known in Germany – also in the late sixties – asked if I could take her husband along when she heard about my trip. Her husband, Steve, would have much preferred a fishing trip, but this was an opportunity for him to spend time doing something completely new. He enthusiastically joined me for the pre-dawn trip through central Florida.

The first day’s project turned out to be an eight-hour bust. While I was like a kid in a candy shop taking photographs of old fighter planes, it turned out – after lifting the airplane and tailpipe onto the trailer, - the trailer was too small and everything had to be unloaded. We needed a different trailer. Steve, at first in awe of the collection of twenty one MiG-21 fighters stacked uniformly in the fenced parking lot, was soon picking up fragments of broken panels and levers written in Russian as souvenirs for his Ukrainian neighbor. His eyes lit up when he found the ejection seat handle.

Max was left with rescheduling the crane and ensuring the trucking company would bring an appropriate trailer as Steve and I headed south in the mid-afternoon heat of Florida in early September. I doubted I would return as there wasn’t anything to do but observe as the professionals did all the real work, but that was before Steve taped the handle to Vlad’s lawn chair.

When Max called with the new pick-up schedule, I asked if I could bring along a third party, a former MiG mechanic. Max was thrilled we would have someone who could translate the stencils and panels.

Vlad’s translation duties involved in depth conversations with not only Max, but also with Diego, the young engineer with Draken who knew the aircraft as well as Vlad! The painted stencils on the fuselage were written in Polish, but the manufacturing tags and interior markings were written in Russian. Vlad never removed his mask as he answered questions and climbed around his old airplane in the warm morning sun.

We weren’t the only people picking up MiGs that morning. The US military purchased the majority of the remaining airplanes to be used as target practice and there were two trucks in front of us as we waited for our movers to arrive. While Vlad soon lost himself in the maze of airplanes, we all began chatting among ourselves about the coincidence of having a actual Russian Air Force MiG mechanic with us. One of the other drivers said, “Hey, wait a minute…” and walked briskly away.

He returned shortly with an older, muscular looking man, also about our age. “Where’s the Russian?” he asked. 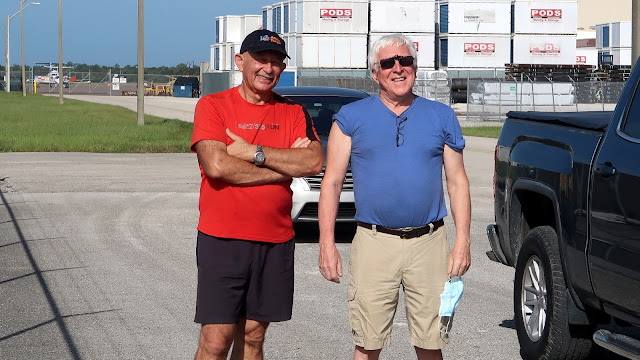 We called Vladimir over and the two greeted each other cautiously, first in English, then in Russian. The other truck driver, who had just pulled in from Jacksonville, three hundred miles away, was also Russian.

They were guarded at first, but both got louder and more excited. They were soon laughing and actually glowing. Vlad and the truck driver were from the same neighborhood in the Ukraine. They had common schools and teachers and both knew storekeepers. They had grown up about three miles apart! Vlad and his new friend talked on the far side of the lot for over an hour, the driver missing his time slot to pick up the wings for his airplane. We used it to load ours. When they finally returned, the driver laughed and said, “Vladimir, I can longer talk to you! You cost me too much money!” 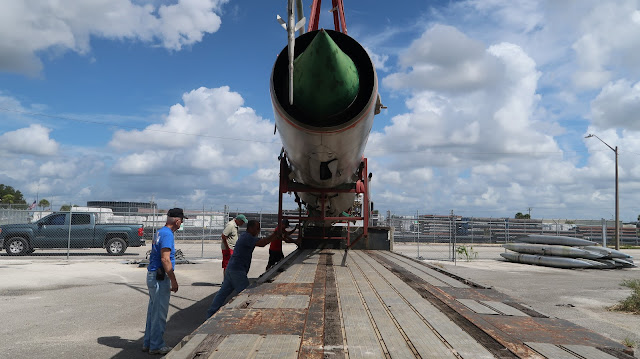 Vladimir talked the entire trip home. The truck driver was the first person from his area he met here since he slipped out of Russia just before the Soviet Union collapsed in 1990. The truck driver it turned out, left in 1990 as the confusion of the times allowed him and his family to get out as well. He had not met anyone else from home either.

As I sat in the back seat watching Florida’s flat, green landscape roll past, I couldn’t help but wonder what Max will find to move next. 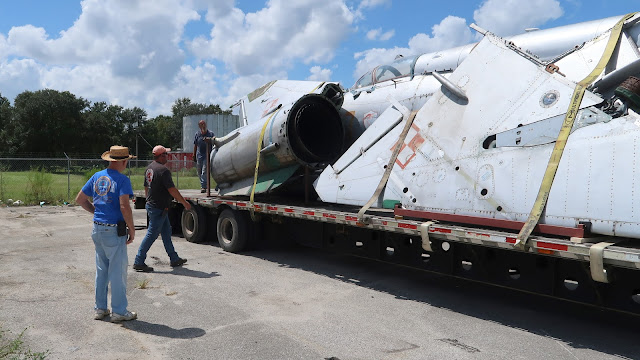 PostScript- Assembled and cleaned, but not yet ready for display, the Indiana Military Museum prepares the Mig-21 for Public Display.  Stay Tuned 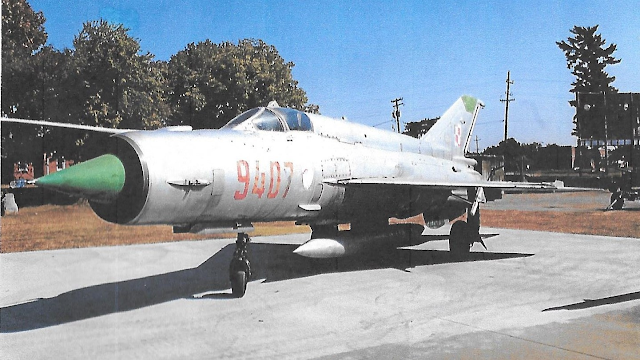