I drifted away from our monthly writer's group discussion about people hearing things differently than a writer intended. I didn't physically leave, of course, but I may as well have been on Mars. My memory rudely inserted the anxiety I felt once when I impulsively spent eight hundred dollars on stereo equipment that I certainly didn't need. I was as detached from the writer's meeting as if I had fallen asleep. For some odd reason, my muse wasn't interested in the writing being reviewed, and some oral comment or critique I heard during the meeting shut down my normal brain function and I was suddenly in my own world, my mind vividly filled with apprehension from the unexpected - and quite rudely inserted - memory from years ago. My muse had abandoned me.

Memory has a way of being kind, or at least kinder than reality, and the excitement of having two close friends stop by after work to listen to my new, expensive, pride and joy speakers gradually slipped in to displace the anxiety I felt when I spent over a month's take-home pay on a whim. Back then, our stereos were the pinnacle of home entertainment back when direct-drive turntables, cobra-style tonearms and Shure V-15 type 3 cartridges were the mark of excellence in personal taste and audiophile distinction. 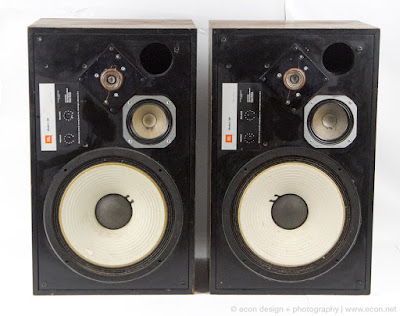 The purchase of the stereo components I had dreamed of for years - a pair of JBL Century 100 speakers - didn't come from our meager budget, but from an unexpected financial windfall that was the benefit from a brutal stretch of overtime work that upset our family routine and even affected our relationship. I was rarely home during that miserable period, working sixteen hour days and even once spent twenty-four hours, without interruption – not even for food – on one service call. When I received my first large overtime check, I splurged on the JBL speakers that I still have.  My wife supported my desire to buy the speakers as a just reward for both of us enduring the tumultuous time.

I carefully “balanced” the new speakers per the instructions I saved from Stereo Magazine, measuring the distance between the speakers, taking into consideration the drapes and carpet, and listening to professionally mastered records that carefully reproduced the exotic sounds required to adjust my Marantz 200 watt stereo receiver to the new, space dominating speakers.

Paul stopped by first, parking his custom-turbocharged Datsun 280Z in the driveway. Money was no object to Paul in his quest for perfection, and his taste in stereo sound was impeccable.

“Hmm,” he said, standing dead center between the speakers. “Try Allan Parson’s Pyramid. That’s a great one to test with.”

I carefully played the first cut on the “A” side, then waited for Paul’s profound analysis.
“They sound really, really good, George, but you need to crank up the bass a little. The sound just isn’t full enough.”

After Paul left, my wife – who thought the settings were perfect – asked if I was going to change the bass settings.

Not twenty minutes after Paul left, Bob pulled up. Bob was another single friend who was also a renowned audiophile. His LP collection was stunning in its own right. I respected Bob’s opinion as highly as I regarded Paul’s.

Standing in the very same spot Paul had stood an hour earlier, listening to the same Alan Parson’s album, at exactly the same volume and adjustment, Bob quietly pondered the music.
“Well, George, they really, really sound great, but there’s way too much bass. They sound ‘boomy’.”

The room slowly came back into focus and I once again heard voices discussing the merits of something or other. Someone’s writing was still being discussed. I carefully glanced around the room. The moderator was telling a new group member to take critiques with a grain of salt as everyone hears things differently. No two people interpret the same thing the same way.

I couldn’t help think how true. And not with just writing.

So true. Love the article.

Thanks for the memories of the 60's stereo era. We listened to Acoustic Research AR3a's via Dynakit preamp, tuner, and 120 watt amp. Ar Turntable.

And everyone thought it sounded great.