I carefully selected the old photographs I envisioned for our walk-in video. You know, the background video accompanied by knock-your-socks-off music every corporation puts on the big screen at the opening of every major corporate event. Or sometimes, as we have done in the past, played on the video playback units of the huge tour buses as we headed toward one of our special venues.

While I thought the big tour buses would be a great way to show the video as the audience is basically captive, I found out at the 2009 Dayton reunion that wasn't always true as two old missilemen in front of me on the bus jabbered about a faded memory they shared from fifty years ago while my masterpiece played to the few who bothered to look up. I decided I would do it differently this year. I would make this one so dynamic they wouldn't even have to turn up their hearing aids. I was going to evoke memories that would bring tears to their eyes.

Visions of people wildly clapping, joyous at the marvelous integration of our nostalgic photographs from days gone by with the soul-stirring words and powerful guitar of Bob Seger's classic anthem, “Like a Rock,” flashed before me. This would be the third such video I've done for the TAC Missileers Association and my last, so I decided to keep it short and powerful. This video would have no Air Force anthems or bugle calls of Reveille. No, this would pluck the strings of everyone's heart as they saw themselves as we were some fifty years ago, standing tall as missilemen on combat duty in Okinawa, Taiwan, Korea, and Germany, overlaid by photographs from recent reunions showing us as we are now. Just over five minutes long, including every single unit's patch shown in chronological order with its own label, I knew I had a masterpiece.

I pondered contacting the publisher of “Like a Rock,” or even Bob Seger himself to get permission to use the song, but decided it was far easier to ask forgiveness than permission. Besides, it was only going to be used once. I didn't plan on uploading the video so no one would know I'd used his music without permission. I rationalized he would allow using the song if he saw the video, so I wasn't worried. After testing the final video on my wife, who couldn't attend the upcoming TAC Missileer Reunion in Orlando because of her class schedule, really liked the video. I burned three copies to DVD as we used three buses the last time we visited an Air Force Museum in Dayton, Ohio. I was ready, one for each bus. We had two tours scheduled at the nearby Cape Canaveral, but only Friday would we have all of our people together at one time. 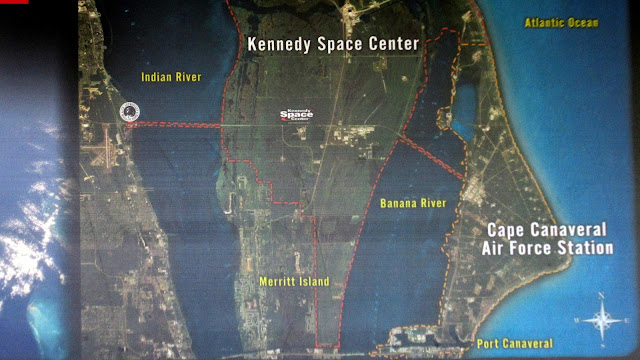 There are two separate, distinct parts of the Cape. The civilian NASA part, which was our Thursday tour, houses the Kennedy Space Flight Center and includes the huge Vehicle Assembly Building, shuttle launch pads 39A and 39B and the Saturn V display hangar. The KSFC is located west of the Banana River. All other launch pads, such as the ones used for Apollo and Gemini, are on the east side of the river known as the Cape Canaveral Air Force Station, which we were scheduled to visit on Friday. The Air Force Station also houses the Air Force Space and Missile museum. Unfortunately, it is a military establishment and has been on security code Bravo since March.

The museum was closed to the public and all tours were canceled, but only after our association had already reserved a tour. As a gesture of good will, the folks who run the AF Space and Missile Museum invited us to watch the launch of an Atlas V on Friday as their guests instead. Being invited to watch the launch of an Atlas V from the press area was a remarkable event for our group, the TAC Missileers Association. The consolation was as exciting as the scheduled tour as many of our association members have never seen a live launch.


Our first bus trip on Thursday from the Embassy Suites on International Drive in Orlando to the Kennedy Space Fight Center didn't include all of our attendees as some elected to visit Mickey and his friends, or more productively, the Morse Museum of Art in Winter Park that houses the Tiffany collection. Only two buses made the trip, but it didn't matter, I lost two of the three video disks anyway. As long as I had all three for the trip on Friday to watch the Atlas V GPS IIF-11 launch from pad 41 at the Cape Canaveral Air force Station, my dream would be fulfilled.

Murphy was riding on our NASA bus on Thursday – yes, NASA runs its own tour buses around the Kennedy Space Flight Center as part of the admission ticket – and as we passed pad 41 off in the distance on the other side of the river – where we could see the Atlas being readied for launch – our bus driver casually mentioned it was an Atlas V mission scheduled for Friday that had been scrubbed.

After an agonizing night for our organizers and the marvelous people at the Space and Missile Museum, the original Cape tour was reinstated to compensate for the scrubbed launch. So, on Friday morning, armed with the only Walk-in DVD I could find, I was ready to show the video on each of the three buses in succession.

While many of the members had little connection with the one pad that was special to all the veterans from my particular system, the marvelous volunteer tour guides let us stop at Pad 21A and B, and get off the buses. Special memories from the early sixties swept through the few who knew the place, and as we all know, we'll never be back. As we pulled out of the Museum parking lot, I handed the DVD to the driver to play on the bus system. A great time for the video, you'd think, but cries of protest from two women in the front of the bus put a crushing end to my vision.

“Turn off that horrible music!” wailed one gray-haired woman even before the TAC Missileer logo rolled onto the display screen. A second woman immediately picked up the complaint, loudly protesting that the music I specifically selected to get everyone's attention was awful. The bus driver quickly stopped the video and that was that. I put away the DVD, disgusted that the two women who stopped the video weren't even missilemen. They outranked everyone on the bus: they were wives.

Saturday morning was filled with goodbyes and handshakes and promises to meet again in two years in Las Vegas. We know we won't all make it to the next reunion, our ranks get thinner every year. I started my truck and rolled south and thought about the video, “Like a Rock.” Yeah, we were like rocks back then. Young, smart – or dumb as rocks depending on your point of view – but we were the best. Well trained and dedicated to our beliefs. We did what we were trained to do, and we did it better than everyone else. Yes, we were rocks back then, but that was a long, long time ago. Way back before we got married or began wearing hearing aids.

I feel for you buddy. It sucks when you put your heart and soul into something meant for people to enjoy and then have it ruined by narrow-minded short sighted selfish old ignorant women. That's just not fair. I used to try and play my travel videos for friends when we'd go over to their houses for dinner after our trips but invariably, the wive's gossip and chatter didn't allow it. I just stopped doing it. It's strange how music is such a determining factor sometimes. No matter which background music I choose for a video, the comments always include at least one bozo who feels it necessary to inform you that he personally didn't care for it .... like I care :-) I just delete those comments now and don't give it a second thought.

The only time I ever had an audience appreciate one of my video presentations was at a memorial wake for a friend. His widow had given me their photo collection and I intertwined video of us at race tracks and in our boats out on the lake with the photos. It represented his whole life with pictures from childhood through both our careers at Honda. I spent weeks getting it just right and it did bring a few tears to a few eyes and garnered quite a few sincere thank yous when it was over.

Kudos to you for trying buddy ... I can appreciate your effort :-)