Having had the pleasure of being guests of Ferrari Corse Cliente during a recent Petit Le Mans (yes, they spell it Petit Le Mans) at Road Atlanta, I came to two conclusions: First, there are no fat Ferrari owners - especially no overweight wives or girlfriends – and secondly, the absolute height of tackiness is wearing a Lamborghini T-shirt to the Ferrari VIP Hospitality Suite. Yes, a woman actually wore a black Lambo T-shirt, oblivious to the odd glances she received from the staff and other guests! 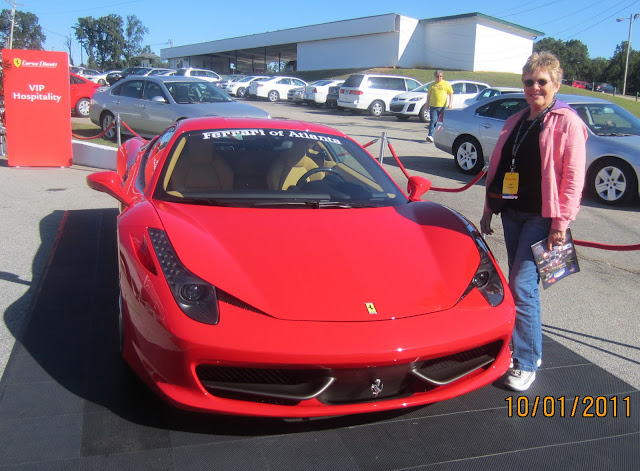 Corse Cliente is the part of the Ferrari organization that supports their clients’ motorsport activities in the Grand Touring championships, among other things. That means fresh roses on the breakfast table along with fine white linen tablecloths. And of course a breakfast of the same caliber to match. 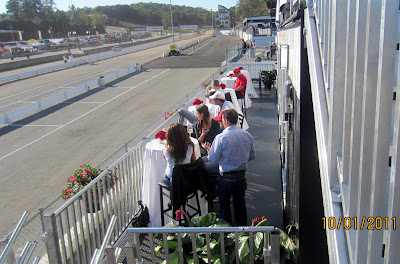 Our daughter and her husband arranged for my wife and me to be included in the guest list for the Ferrari hospitality suite overlooking the main strait at Road Atlanta. Quite a change from when we first came to this race track in 1977 when our daughter was just six years old. We drove up from Miami in our semi-customized Dodge van just to watch the old IMSA Camel GT 100 mile race. That was back when Al Holbert drove his blue and yellow Chevrolet Monza to the overall win for the IMSA race. We sat on blankets on the grassy hillside and got sunburned in the early April Georgia sunshine watching the Porsches and BMWs battle it out for whatever positions were left over.

We actually left that very first race early so the van wouldn't boil over while stuck in traffic leaving the race. That didn't work out. We were only thirty miles from the track before we got sidelined with the temperature gauge going off the scale and steam rolling out from under the hood! A trip to remember as we had to have the radiator replaced just outside Stone Mountain. That solved the problem for about two hundred miles and we boiled over again!

We limped into Miami at four in the morning as the cool night air was the only way we could do over 40 miles an hour and not overheat! But it was the start of our love affair with Road Atlanta, and especially the international twelve hours of endurance racing known as the Petit Le Mans. The full 24 Heures du Mans is of course in France, and is the famous 24 hours the epitomizes sports car road racing.

Fast forward to my 65th birthday when my daughter, who now lives in Georgia, arranged for the both of us to take the Skip Barber driving training class at Road Atlanta. After a morning of having my daughter blow my doors off in Miatas, RX-8s and even the lane-changing exercise with the MX-3s, we got to do 30 laps of the full track in two-liter Formula Dodge race cars during the afternoon driving session. Driving the formula race car was a thrill for me, finally getting to use my old VW driving habits of driving with non-synchronized, straight-cut gears and double clutching on downshifts.  My daughter was raised on automatic transmissions so here I finally had an advantage.  Great stuff!  Yes, we are very familiar with Road Atlanta. 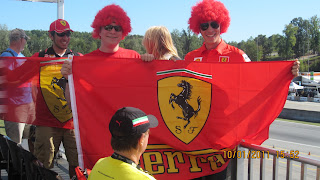 We enjoyed the courteous and friendly service of Corse Cliente, and we certainly enjoyed the food! The location was marvelous to watch the pit action as well as the racing from the famous downhill turn twelve and into uphill turn one. It was nice to have a real porcelain toilet, in the appropriate Ferrari black, of course, rather than the odoriferous fiberglass porta-potty that has always seen too many users.

Still, sitting in the grass and having the ability to move from corner to corner has its appeal. After all, sports car racing is about different lines and different techniques, different viewing angles, and best yet, getting close to the noise and smell of fast racing cars.

All in all it was a marvelous experience, certainly one to be remembered. The last time I was at the Petit Le Mans, I burst my appendix just after the race and spent several days in a hospital bed. But, aaah, the racing was great!

We'll be back again next year. Maybe we'll be lucky enough to be guests of Corse Cliente, but if not, we'll be found on the hill overlooking turn five. 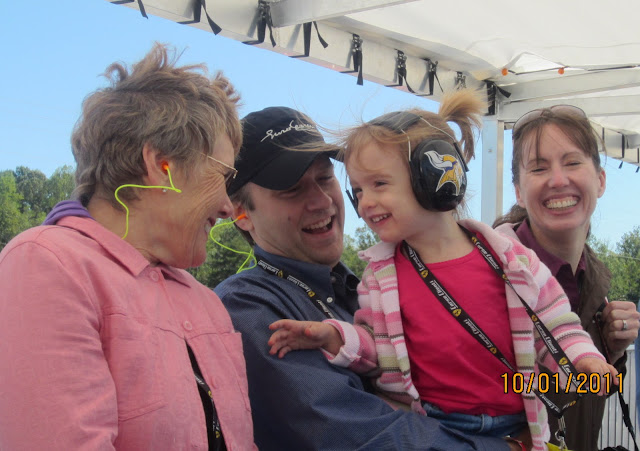